We in the collective (Flash Mob, not Borg) are pretty darn excited about Not Part Of (and also, obviously, MIF). We're so excited, in fact, that, not only are we co-hosting the Flash Language Literary Quiz (see previous post), we've also gone and signed ourselves up for the craziest writing project, like, ever (OK, well, maybe not quite ever). Running in conjunction with the Re-Covering exhibition - for which 40 local and international artists (from my Chorlton mate's hubby Nick Jordan to the likes of David Shrigley) have redesigned famous book covers - is The Reading.

The Reading is a multiple writers’ residency with the aim of creating a ‘textured text’. Since Friday 17 June, 72 writers have been collaborating on a narrative (story, play, poem, script, diary, commentary, essay, even lyrics) that will reach its conclusion on Sunday 31 July. Each contributor has two-and-a-half to three hours in which to write a text for inclusion in a publication, along with two contextual essays, to be edited by Matthew Frost from Manchester University Press (and Manchester Literature Festival). Writers work on a laptop in the Untitled Gallery where the creative process is projected live. It's also streamed online* and displayed in real-time in various venues, including Cornerhouse, CUBE, Chinese Arts Centre, Castlefield Gallery, Manchester Art Gallery, The Reading Room Collection and MMU Library. The start point for each contributor is the final paragraph of the previous writer’s entry, and the work can be influenced by the gallery environment, the show’s artworks, the flow of visitors and 'your own fevered imagination'.

Out of the Flash gang, on Thursday 14 July, David Hartley (12-3pm) picks up a paragraph from poet Anna Percy then passes one straight on to me (3-6pm); then on Thursday 21 July it’s Benjamin Judge (12-3pm) and on Friday 22 July Fat Roland (12-3pm), with experimental poet James Davies sandwiched between (Thursday 21 July, 3-6pm).

There are seven** slots currently still available towards the end of July. Get signed up!

*Actually, that's not true. Katie at Untitled said: "Unfortunately we weren't able to produce a live stream for the website due to technical problems, although there is a recording of the first day of the residency at http://www.artdes.mmu.ac.uk/recovering/"
**Actually, four on Thursday 30 June.
Posted by Sarah-Clare Conlon at 1:55 PM 1 comment:

Remember Flash Mob Literary Salon and Writing Competition? Well, you can now listen again, thanks to Chorlton FM. Check out the Flash Mob website for links to the podcasts and the opportunity to hear my dulcet tones, my temporary inability to say the word "apolocalyptic" and my squirming when trying to introduce our headliner who had nipped to the loo. Still, I managed to not swear, which is A Good Thing.

Next up for the gang behind Flash Mob is the Flash Language Literary Quiz, which we're hosting as part of Not Part Of (the fringe festival to Manchester International Festival) along with our mates Bad Language. Check out their blog post on the subject, complete with links to Skiddle and Facebook and the Not Part Of website and events programme. As well as questions of a literary nature, there will be readings and fun. It promises to be ace, so put Thursday 6 July, 7.30pm, Barcelona in the NQ, in your diary.
Posted by Sarah-Clare Conlon at 11:21 AM No comments:

...here's a link to the interview a did with Emma Jane Unsworth for Bookmunch.

The last answer is an absolute gem!
Posted by Sarah-Clare Conlon at 11:25 AM No comments:

Everything, and the girl

Today sees the publication of Emma Jane Unsworth's debut novel, Hungry, The Stars And Everything, through Hidden Gem Press. It's quite timely given last night's lunar eclipse: one of the episodes in the book is about an occultation. I've written a review for Bookmunch, and I'll shortly be interviewing Emma about some of her themes and influences: keep your eye on Bookmunch.

Emma's book launch is tonight at 6.30pm in the fabulous Portico Library (complete with its rather ace "Polite Literature" section). You can also catch her reading as part of this weekend's Book Market, organised by Literature Northwest: the Comma Press website has her in the 4-5pm slot on Saturday. Nice write-up of the event on Manchester Lit List here.
Posted by Sarah-Clare Conlon at 10:10 AM No comments:

Contrary to popular belief (this is a total figment of my imagination: there was never any such popular belief), we didn't have fisticuffs or a big tiff or nuffin: we just got caught up in various other amazing projects, including the Flash Mob Writing Competition. We obviously feel terrible about neglecting our duties and failing to reply to our adoring and heartbroken public with useful and entertaining solutions to their modern-day dilemmas. Thankfully, that dirty little episode is now well and truly behind us, so make sure you wing your contemporary conundrums our way in order that we may have a laugh at your expense, er, sorry, lavish you with our attention.

And get to following our all-new Twitter account, innit.
Posted by Sarah-Clare Conlon at 2:15 PM No comments:

This evening, I'm off to the theatre. I'm seeing A View From The Bridge at the Royal Exchange, but don't be expecting a write-up. There are two reasons for this: 1) I don't have to do one as it's not press night; 2) I don't want to overshadow this here review of the Library Theatre's latest outing, Hard Times...

The Chris Honer production has been garnering a lot of interest, largely because the action takes place not in a theatre, but in Murrays' Mills in Ancoats (how achingly trendy), and is a promenade piece with an opening salvo in a separate area to set the scene. What's more, Hard Times isn't even a play, rather a novel by Charles Dickens. Goodness! As a lover of modern literature, I'll admit I don't care all that much for Dickens, and tend to agree with my Ask Ben & Clare colleague Benjamin Judge's take on the bloke on We Hate Words. However, this adaptation made Dickens accessible and, although I don't know the original, I thought the transition to "stage" worked really well.

It's an involving story of class and love and unionism and death, set in the fictional northern milltown Coketown (not actually Manchester, as is insinuated in the programme, but apparently Preston, so a proud Prestonian informed me), with plenty of colourful characters (including, pictured, the blustering Josiah Bounderby, played by Richard Heap, and poncey Londoner James Harthouse, played by Richard Hand) and a smattering of humour. There's even some impressive acrobatics during the scenes involving Mr Sleary's Horseback Circus, courtesy Arthur Wilson, Owen Gaynor and Lucy Frost. Ringmaster Sleary is suitably slurry, and actor David Crellin segues well between him and downtrodden clog-wearing weaver Stephen Blackpool, who gets some great lines: "It's a muddle I can't see clear of", being one. 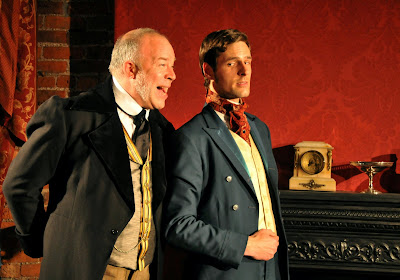 If I'm totally honest, this is the first Library production I've come away from gushing with praise and recommendation. Everything seemed to come together, from the lighting challenges and sound effects to the various detailed sets scattered the length of the first floor (Bounderby's dining room, Thomas Gradgrind's study, the Gradgrind family's parlour, Harthouse's hotel bedroom, Blackpool's worker's cottage, the casino, bank and garden, and the circus big top) and authentic-feeling costumes. There are lots of bonnets and hoop skirts and shawls, and one of the key moments - Bounderby's marriage to Louisa Gradgrind (made nicely mardy by Alice O'Connell) - feels hugely atmospheric thanks to a billowing wedding gown as the not-so-happy couple sweep off to the far end of the long mill room.

If I were to gripe (and every balanced review should serve up a bit of negative with the positive, or vice versa, right?), it would be to say that following the action so literally was quite tiring for a lady of my advancing years, and the shuffling crowd does unfortunately drown out some of the dialogue. However, being so close to the proceedings and players does immerse the audience in the plot and makes for a truly intimate experience.

Hard Times is on until 2 July. A limited number of tickets are available between 5.30pm and 6.30pm for that evening's performance from the temporary box office in The Midland Hotel (cash only). See the Library website for full details.

Photo by Gerry Murray.
Posted by Sarah-Clare Conlon at 9:32 AM No comments:

Some of the Flash Mobbers took a road trip yesterday, to Lancaster. Little Dave and Mister Ben have stories in the latest Flax anthology, appropriately enough called Flash Mob (Flax026), and the launch took place at The Storey Institute where Litfest is based. What a great building, and how nice to finally meet Sarah Hymas, editor of Flax. She introduced proceedings then ten of the eleven writers read their 400-word inclusions (which you can see, and hear, online). Next was a break, when we were encouraged to check out Flax028 - a new haiku commission from Maya Chowdhry with a stop-motion film of seeds growing running in an inside-out garden shed. Actually we just chatted to folk and scoffed chocolates. The ten then read pieces of their other work: some, like Norman Hadley's sci-fi Panspermia, were companion pieces to the entries; others weren't even prose at all. Carys Bray's tale had a nice wet theme running throughout, even down to a mention of Noah's Ark, and I really liked Clare Kirwan's bit of smut, Parallel Conservatory. 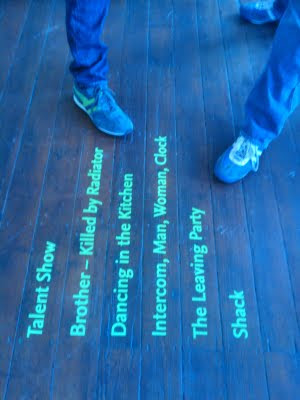 Dave (lefthand foot) delivered more of his one-sentence stories: Unicorn Logistics, Strategic Magpies, Finger Thief, Perpetual Hen Night Endless Stages, Tyson/dog, Soul For The Devil and The Mould On The Chip... Ben (righthand foot), meanwhile, read a story with no name about a man with a cactus for a hand and a difficult relationship with his father. Dead funny. 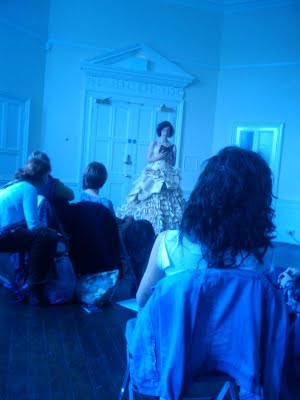 Claire Massey, who had butterflies in her first story and moths in her second, Growing Cities, then read the contemporary fairy story A Book Tale (Flax027). This was commissioned for last October's festival along with the amazing Word Dress, custom-made from the pages of books by wedding frock designer Jennifer Pritchard Couchman. Claire refers to "the book dress" and its "crumpling sound" in the story, which nicely reflected Growing Cities with its miniature town of red-bricked houses, derelict mills and boarded-up pubs, as well as another of her pieces Feather Girls (which appears in Salt's The Best British Short Stories 2011) through the "dress of smoke and feathers".
Posted by Sarah-Clare Conlon at 6:22 PM 2 comments:

Prose to the occasion

Managed to catch some more bookish goings-on at Chorlton Arts Festival on Monday. The evening was a double act between two Salt authors: Robert Graham, whose latest novel A Man Walks Into A Kitchen has just hit the shelves, and Heather Leach, whose story So Much Time In A Life made the grade for the Nicholas Royle-edited The Best British Short Stories 2011 collection. You can read my review of that tome on Bookmunch here. What's more, I've written a full-blown review of Monday's literary soiree for the fabulous CAF blog; feel free to peruse that at your leisure here.
Posted by Sarah-Clare Conlon at 10:39 AM No comments: