Nothing to see here

So (as current parlance dictates) this post jumps in where the last left off: with mention of writer and critic David Collard’s Leap In The Dark. Save the date! I’m one of the contributors to the 22 August episode, which is a Love Bites special, headed up by CD Rose and featuring readings from last year’s Dostoyevsky Wannabe-published Buzzcocks-inspired anthology of short stories and so on.

Thankfully, I’d already had the foresight to dip my toe into the in-the-ether reading arena – after watching and waving at a few “virtual” events, I put my name on the open mic list for the third outing of Flapjack’s Word Central Online on June 25, featuring Henry Normal as guest poet, then, a week later, A Lovely Word, which saw me head to Liverpool via the magic of t’interwebs. (Photographic evidence of my first attempt, kindly hosted by Tony Curry and Paul Neads, is below.)

Other exciting upcoming activities autumn-wise include the publication in PN Review (yikes!) of the collaboration me and Jazmine Linklater made for last year’s European Poetry Festival, and the publication of an article commissioned by Open Up magazine about my reading habits since being locked down or lockdowned, however we’re saying it.

If you can’t wait until September, then in June I was super excited to find a home both for one of my favourite flash fictions and for one of my brand-new poems, of which there is now a fair number. A pamphlet-sized number, in fact, so I’m currently exploring the possibility of getting a book made. I know, right? ‘The Wild’ was published by Ellipsis here, while ‘Guidance Avoidance’ made its way into the rather splendid Postcards From Malthusia project here, run by New Boots And Pantisocracies’ Bill Herbert (Newcastle University) and Andy Jackson (University of Dundee), who said: “By Day 67, Sarah-Clare Conlon could declare all shall be surveilled, and all shall be surveilled, and all manner of fink shall be surveilled - and none of us could gainsay her.”

Continuing my self-imposed Continued Professional Development programme, I’ve signed up for another online poetry course, starting later in August. Called How To Read A Poem, it’s being run by the University of York – JT Welsch of that establishment also brought to my attention the York Festival of Ideas at the start of June, leading to me taking part in two fab workshops run by Leeds-based Found Fiction: Cutout Poetry (see one of my efforts below) and Blackout Poetry. Part of the same festival was a great online reading and short film event, called Words & Swords, which featured Mary Jean Chan – with a fencing demo to accompany her poems from latest collection Flèche – and the always amazing Vahni Capildeo (the latter streaming live from Trinidad, I think, complete with exotic bird sounds). 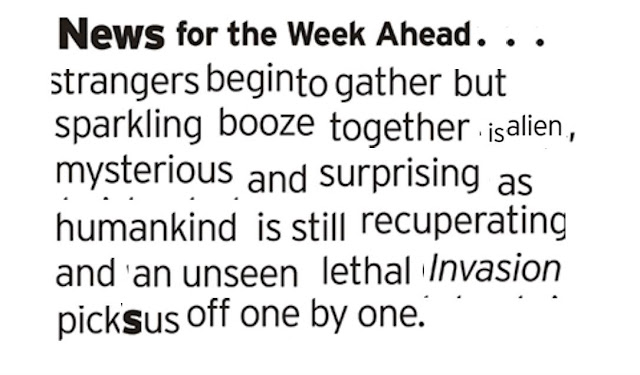 Other transatlantic treats came courtesy an afternoon showcase of “unconventional” (Wikipedia) Canadian Bill Bissett’s work – and the workings of his mind – hosted by the University of Glasgow’s Colin Herd. Colin has been inviting the great and the good to a Zoom room near you, and I’ve also since “watched again” Peter Gizzi read from his Carcanet collection Sky Burial in May.

Me old Verbose muckers Adam and Zoe and now Jake too have taken the monthly night online as Virtual Verbose – I’ve missed the first, with Tania Hershman, and the last, but I did catch the middle one with Reece Williams (of UNESCO Manchester City of Literature, among other things) and Phoebe Wagner (her pamphlet The Body You’re In is currently half price with Bad Betty Press). Meanwhile, brand-new events have been set up especially for All This – at the end of July, I dropped into East Anglia for the latest in the Live From The Butchery series of live online Sunday-afternoon poetry readings hosted by Martin Figura and Helen Ivory, run in association with Ink Sweat and Tears, and that month featuring Matthew Caley, Rachael Clyne and Ron Egatz, tuning in from Minneapolis.

There’s also been a whole host of books welcomed to the world online. Pleased to make it to Aaron Kent’s launch of Invisible Hand Press pamphlet Melatonin Spring Collection, with readings from Man Met’s Andrew McMillan and also Jennie Edgecombe, whose memorable elastic band piece I think I saw read at a PN Review launch at Castlefield Gallery, maybe last year? It’s a rhetorical question, don’t sweat it. Travelled without moving to Nottingham, where Alan Baker introduced new Leafe Press titles Museum of Lost and Broken Things by Lauren Terry and Reading Moby-Dick and Various Other Matters by Martin Stannard. Went to watery Sowerby Bridge (virtually) for the first online Puzzle Poets Live, with guest poet Sarah Wimbush, and joined Jo Bell on her Macclesfield Basin pontoon for a Poetry Society event called Into The Water. 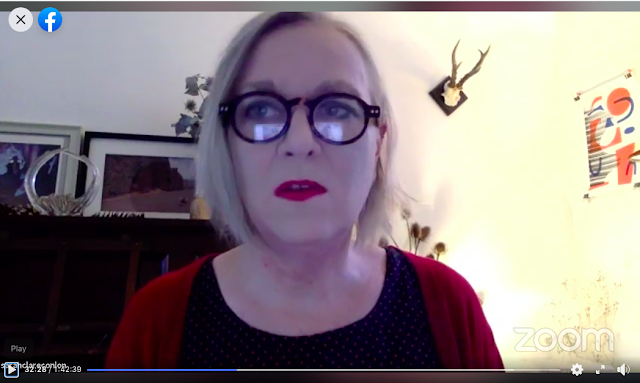 Another Poetry Society shindig was the launch of the summer 2020 issue of The Poetry Review, with readings from Rachel Long, shortlisted for the Forward Prize for Best Collection 2020, Geoffrey Dearmer prize-winner Phoebe Stuckes, Moniza Alvi and Brooklyn-based D Nurkse. Closer to home, Manchester Libraries in partnership with Serpents Tail and And Other Stories put on a Writing The North special, with James Clarke (Manchester Writing School graduate) and Luke Brown (Centre for New Writing lecturer) reading excerpts of and chatting about their new novels – both second novels, both set in Lancashire (Rossendale and Fleetwood respectively). Into August, and Nine Arches Press showcased new anthology Primers Volume 5, with editor Jane Commane and mentor Jacqueline Saphra introducing three new voices: Krystelle Bamford, Claire Cox and Hannah Jane Walker.

Loads of festivals have gone online, so this year I’ve been to Hay for Ali Smith’s presentation The Beginning Of The And (I’ve also been to fancy lectures by Oxford Professor of Poetry Alice Oswald and the great Professor David Bellos, now of Princeton, but who was my tutor at Manchester when I was an undergrad a thousand million years ago, giving the annual WG Sebald Lecture for the British Centre For Literary Translation at UEA). Work in translation also featured at the Versopolis Readings and Conversation, hosted by Kim Moore (another Man Metter) at Ledbury Poetry Festival, and, also in the West Country (assuming Ledbury is classed as West Country), I made a whistle-stop at Bath for this year’s Flash Fiction Festival, clocking Carrie Etter, Kathy Fish and Meg Pokrass.

This week (technically it was last week, but I took a train trip to Shrewsbury for the first time in my life on the actual day, so caught up via YouTube), I headed across the Irish Sea for The John Hewitt Society’s Digital Festival Of Literature & Ideas and their Gallery Goes… event with readings from Gallery Press poets Tom French, Eiléan Ni Chuilleanáin and Vona Groarke, who taught me on my Masters at the University of Manchester’s Centre for New Writing, along with new Associate Publisher of Manchester’s Carcanet Press, John McAuliffe (who I listened to talking to Jessica Smith in episode four of The Rylands Brief podcast. So modern).

Posted by Sarah-Clare Conlon at 7:28 PM No comments: