These instructions come up one by one on a dot matrix display above the "stage" (which is essentially just the shop floor of a modern warehouse and feels like an indoor basketball court; vast and complete with the noise of squeaky trainers), typed in by Lisa and Sonia (the third instruction with the addition of: "Can we join in?"), and interpreted first by us then by the performers. 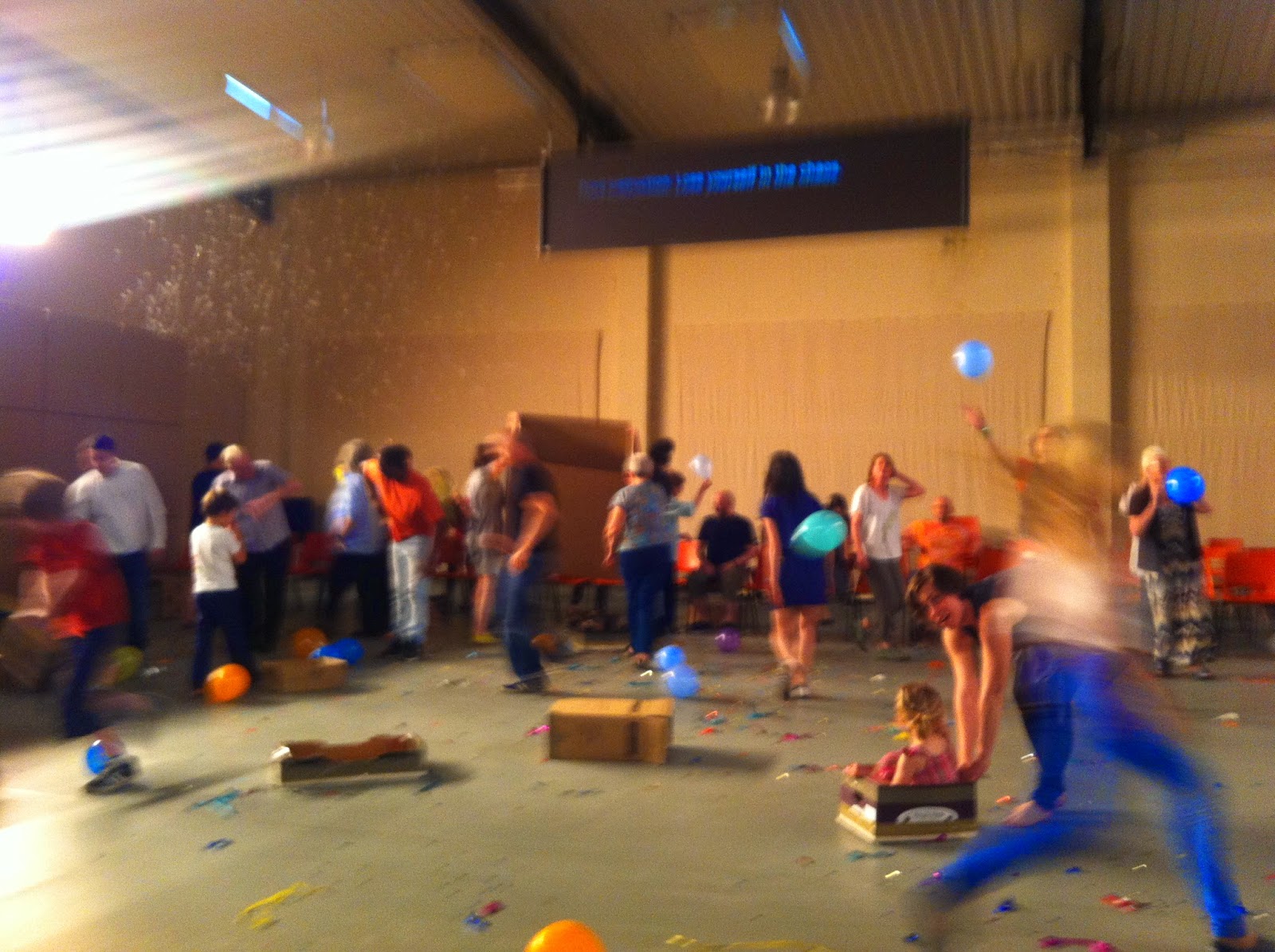 This is Quarantine theatre company's production Summer, the first of four parts of a larger, three-year-long project about the human life cycle and our relationship with change. Autumn looks at the older generation, Winter deals with death, while Spring, I'm told, is about birth. Summer encompasses all age groups, from the tiniest tots upwards, and, despite the voluminous setting and extensive cast, does have an inclusive and intimate feel to it - with a very personal introduction to some of the actors (all amateur), quizzed via a PA system by a lady at the top of the raked seating behind me. It also feels cyclical, taking the audience on a very circular journey, and ending in the same way it starts, with a vocal unpacking of thoughts and feelings from the players (different ones for each performance). In between, most of the narrative is told silently, through actions such as posing, as if for wedding photographs, in delineated groupings (for example, all the men, all the women, all the children, then different sub-sets of these - the Venn diagrams of social and familial categories, if you like), and a physical unpacking of life from holiday suitcases - not just T-shirts, beach towels and shower scrubs of all colours, but also violins, Anthony Horowitz thrillers, family portraits, even a glitter ball.

Dance and movement is important for telling the Summer story - at one point, most of the cast stands still and responds to instruction number two while some others start running around; at another point, we watch everyone partying together while each individual also does their own thing. There are streamers, balloons, feathers, confetti… there is Mister Blue Sky by ELO, Take It Easy by The Eagles, a song by Led Zeppelin, Feel The Need In Me. There's a lot of joy in the show, but there's also a fair amount of sorrow; one part involving the use of microphones to amplify the actors' voices feels slightly one-way and a bit too emotional, especially when we've almost got used to a lack of dialogue. Having said that, all that on-stage fun would be a bit frivolous without some depth. I also suppose it's easier to invest personally in the show because we know that these are real people telling real stories, not just actors reciting a script. A vibrant production with clever direction: I look forward to the changing of the seasons.

Last Wednesday was Bad Language and afterwards "BL veterans" Fat Roland and Dave Hartley both wrote on their blogs about how on that particular evening they underwent some kind of performance epiphany, together but separately, if you know what I mean. Weird thing is, just around the same time I also had a "performance moment", but for once I wasn't with my fellow Flashtag members. In fact, I wasn't even in the Rainy City; I was over in the City of Light, Paris. Some background. The Flashtag writing collective was created nearly four years ago, when we performed our micro fiction for the first time at the 2010 Manchester Blog Awards (as they were called in the olden days) then, a month later, at the inaugural Bad Language. So how odd for three out of the five of us to have a significant breakthrough just at the same moment, right now. 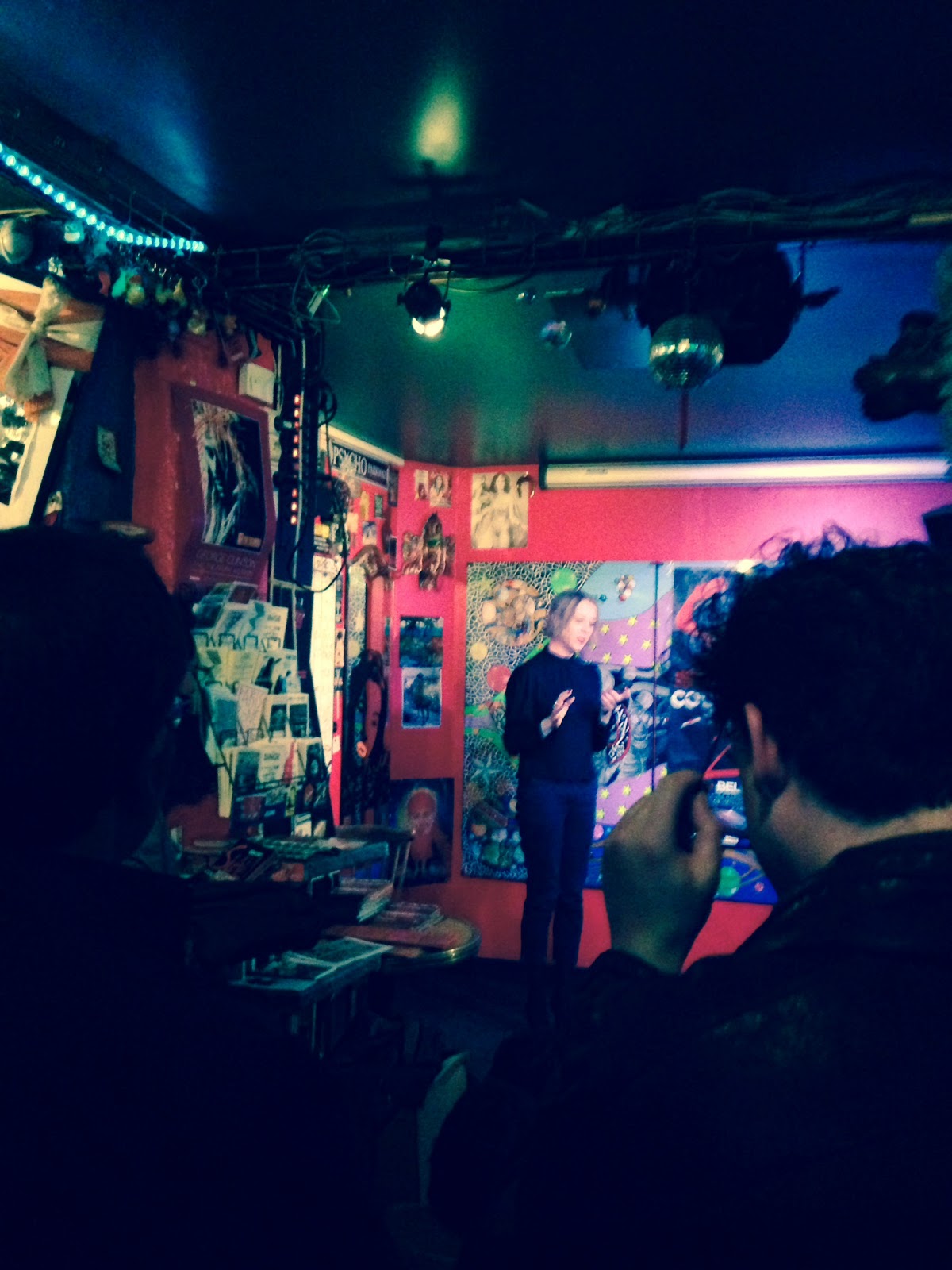 So, what happened? Well, Dave learnt a 300-word piece off by heart, having been influenced in some part by Flashtag's recent Short Short Story Slam (the next is 8 July, btw - get it in your diaries!), when the winner Simon Sylvester committed not one but three stories to memory: "He was able to liberate his hands and eyes from the ubiquitous paper and put them to good use elsewhere: in gesture, audience eye-contact, and character embodiment." Meanwhile, Fats dealt with a heckler in a cool, calm, collected and, by all accounts, comedy way. He posted: "What struck me about that moment was I could multi-task my little brain gremlins to enable me to plan mid-performance. I'd not done that before. I felt like a stand-up." 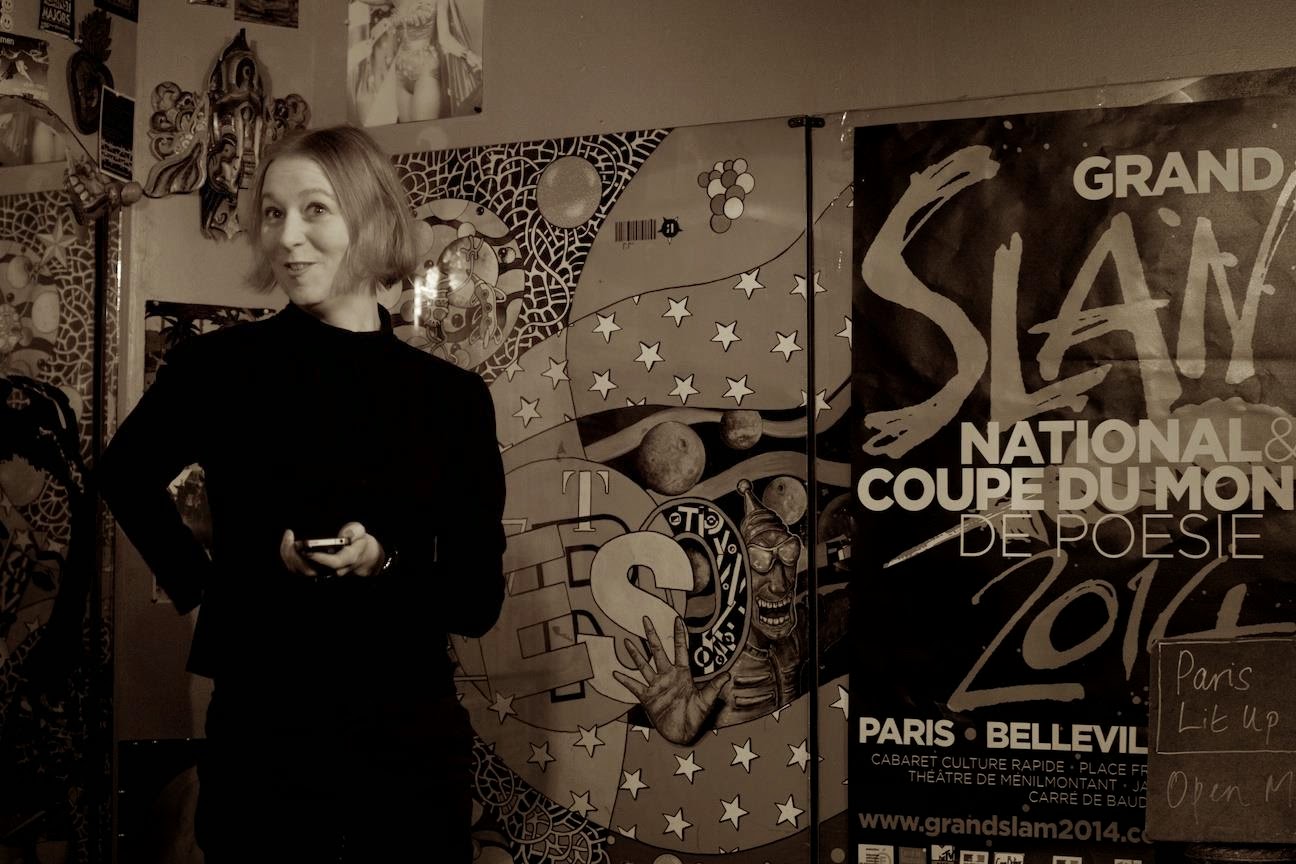 And me? I didn't just have one performance moment, I had two - last Thursday, so a little over a week ago, and then Monday just gone. I'd already arranged to read at the weekly Paris Lit Up night in hipster Belleville, which was absolutely rammed but very welcoming (pix above; see the PLU blog of the night here), and  after my turn, audience members and fellow performers alike encouraged me to try out SpokenWord Paris the night before I came home. This was equally popular (how do they manage it every week?), just as friendly and in a great space with low wooden benches set out amphitheatre style (play spot the Clare in the audience below). The big change for me was that neither venues had PAs - so, as well as having no mic to hide behind, it seemed to make me use more exaggerated gestures and facial expressions (see photographic evidence), and made me speak more slowly as I had to really project my words, which meant I could take my time and look around the room a lot more than usual. This all added to the drama and humour, and got the audience to concentrate and connect, which gave me the confidence to go for it good and proper. 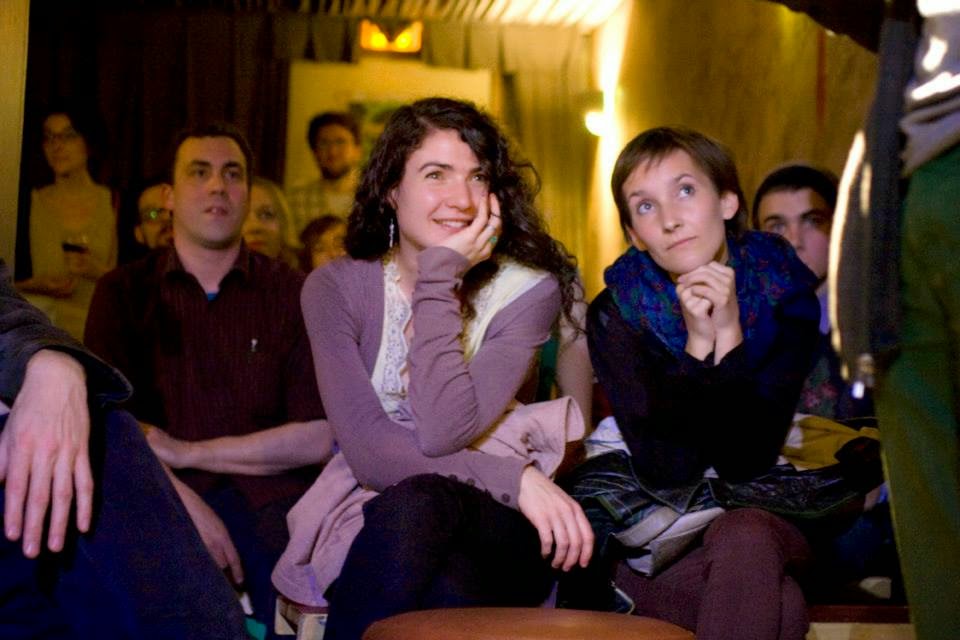 Posted by Sarah-Clare Conlon at 2:32 PM No comments: