David Shrigley is a ruler aficionado. He is also a collector of found ephemera, including maps people draw for their friends to show them how to get to a particular pub or some such destination of choice. I am a dictionary aficionado and collector of discarded lists, so I instantly feel a certain affinity for this tall man standing somewhat self-consciously on the stage at the front of Cornerhouse’s Cinema 1 on Saturday 13 October, to give a talk relating to his current show, How Are You Feeling?.

He likes the “gestural” - without words - though I come away from this show and tell lecture, called, um, Show & Tell, thinking how important words actually are to him; as integral to his work as the pictures or installations. There are neon banners, lost pigeon posters, spoken word albums, tattooed phrases, stuffed animals holding signs, the trademark cartoon combinations of stick drawings and scrawly captions. 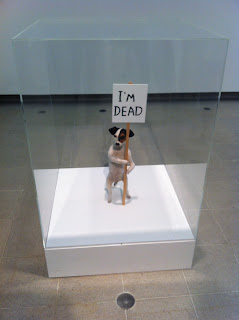 He’s not interested in representational drawing, he says, and he says he can’t draw very well anyway. He’s interested in “economically delivered narratives”, communicating things as efficiently as possible, so with the cartoons and short films such as New Friends, he creates a simple image and a snappy slogan that go together - or a slogan and an image; the order is not always the same - usually with “some odd slippage”. The slippage was unintentional in a series of plates that ran in The Independent some years ago, when the art director unilaterally decided to cut off parts of the image in some cases, and the words in others, essentially publishing an end result that was incomprehensible and pointless. Not surprisingly, Shrigley took his talents elsewhere.

Sometimes, of course, the experimentation is totally conscious in terms of not knowing what the outcome might be: a giant unending sausage of clay at a German gallery, for example, that cracked apart as the medium dried; or filling things (tents, waders...) with expanding foam. “It doesn’t always work,” says Shrigley, “but it’s kind of fun.”

The most fun I’ve had in ages* is watching Shrigley’s slideshow from a break in France with his wife. This is David Shrigley, so obviously we’re not talking sunsets and chateaux; his holiday snaps are of the gite owner’s obsessive labelling, from her surname on the dustbin (within the bounds of reason) to “do not move” on a completely portable object. How do you know if it’s not already been located elsewhere to its original position? Light switches are labelled light switches, and, inspired, Shrigley sculpts a big egg, paints it white and daubs on EGG. Does writing “egg” on a big egg make it more of an egg, he queries. Well, in the context of an art show, perhaps it does. In the context of a kitchen cupboard, maybe not.

I come away from the show with a lot of newfound knowledge about David Shrigley and conceptual art, and I’ve had a good laugh. I’ve heard how a mural he painted at a skatepark in Malmo, Sweden, was too distracting and had to be removed after the skaters kept falling off their boards. I’ve learnt more about the giant ceramic boots I saw at the Haywood exhibition; they’re a response to an old suit of armour on display at a museum in Scotland. I’m interested in Shrigley’s creative process (he has a stack of recycling) and thoughts on success: “If you make stuff that’s not rubbish, that’s a good criteria.” And I leave with his final idea buzzing around my brain: show, don’t tell.

David Shrigley's How Are You Feeling runs at Cornerhouse until Sunday 6 January 2013. Galleries are open Tuesday-Saturday 12-8pm, Sunday 12-6pm (closed Monday).
Posted by Sarah-Clare Conlon at 5:17 PM No comments:

Who's in charge here?

I've been shouting loud and proud about a great literature project currently underway in Birmingham, as part of the annual Book Festival there. It's called Reliable Witness and is on until Saturday night, so if you're in the area, please do go and check it out. 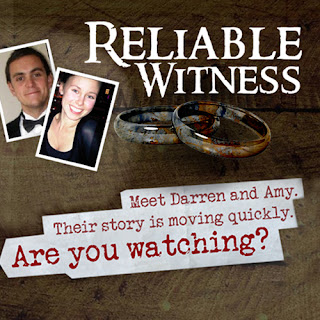 It's very innovative and not something I've come across before, and, as a writer, I think it's a wonderful way of telling a story - get the audience to do it themselves! Using social media platforms in the run-up to the Festival, the group behind the project built up an audience - and a buzz - for a site-specific installation, where individuals are encouraged to interact with a variety of prompts and choose from various options to take them to different outcomes. Everyone comes away with their own version of the story - I've been describing it as a kind of Choose Your Own Adventure for grown-ups with smart phones.

Anyway, you can read more of my words along these very lines here and here.

This new print mag for Manchester looks great and features a piece of flash fiction by yours truly... Keep your peelers eyed for copies in such wonderful environs as the Manchester Craft & Design Centre!

Last night, I went to see The Heretic, a new play rubbishing the so-called facts behind the shock tactics used when dealing with the subject of climate change. Interestingly, when I got home, the idea of politicians using pseudo science and quack statistics to add credence to their arguments came up on the radio (the next chief scientific advisor to the government plans to ensure that scientific evidence is taken seriously by an arts-dominated civil service, apparently), fixing the feeling that the play is very “now” (we’d already been making comparisons to The Thick Of It, of which series four is currently being aired, and passing comment on academia kowtowing to the corporate world in order to secure much-needed funding).

Set in a university earth sciences faculty, lecturer and sea level expert Diane Cassell (played very competently by Cate Hamer, pictured) is the heretic (def: “the upholder of an opinion opposed to the usual or conventional belief”) in question: “I’m a scientist. I don’t believe in anything,” she says at one point. Her own research and the massaged reports of her peers have made Dr Cassell cynical about global warming, but her outspoken views and gas-guzzling lifestyle make her a target for death threats and dismissal. In fact, while the play does deal with some serious issues, emissions and ozone aside (also cropping up are anorexia, self-harm, mental health…), ultimately it’s a comedy, which, in the second act, leans more towards farce. 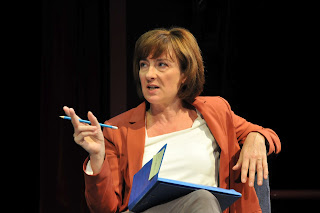 Writer Richard Bean’s last play, One Man, Two Guvnors, was critically acclaimed and picked up a Best New Comedy award, and The Heretic’s clever and colourful language and back-and-forth ripostes, especially with the high-falutin scientific lingo, are very funny. However, I’d say the last quarter of an hour or so lets the rest of the production down a little, and the farce feels forced and the acting a little over-egged (though Ciaran Kellgren as Ben Shotter couldn’t get much more OTT with his “yoof” accent - a misguided move, I felt, on the part of Bean and the director, Chris Honer). It’s a shame, but the dénouement is obvious; the trick played on the audience at the opening of the final scene, when Professor Kevin Maloney (Stuart Fox) comes on stage (following, incidentally, a gaping props clear-up), is cheap, and the loose ends are tied up too glibly, and in too clichéd a way.

Still, The Library have done themselves proud with the set (in the Quays Theatre at The Lowry), which, between acts, moves from a convincingly cluttered university lecturer’s office to a well-kitted kitchen in a very big house in the country (by the way, where does Dr Cassell get all this money from to have a posh pad and a Jaguar car? I thought academics were destitute!). The detail is great, right down to the house’s stable-style back door and coat hooks at the bottom of the stairs and the charts and notices in the corridor outside the office door.

There’s also a nice device when Dr Cassell is interviewed on Radio 4. Having just the audio might not have persuaded us as to the “authenticity” of the clip, but when a screen is lowered from the rafters and we see John Humphrys in all his Today programme glory, it really does add weight to the plot and makes the subsequent disciplinary scene all the more believable.

And that’s what this play is all about: believability. And I’m mostly there, just not fully.

The Heretic is on until 13 October. See the Library Theatre website for times and tickets.