It's dress-down Friday, the perfect backdrop for reading my story Dress-down Friday, which has more stationery and workplace action, and which was published this week on The Pygmy Giant. Yay! You can read it here.

Today, my contribution to the Paraxis Library Wall has also gone live, along with a piece from my mum and submissions from various of my friends.

You can see the whole wall here and my contribution here. The editors had to chop off the last bit of my story because of its smutty content (it is a "companion piece" to Susie Loves Words, which appears in the Quickies: Short Stories For Adults anthology we launched this week - details on how to get your mitts on a copy on the blog soon!), so I'm publishing the story in its entirety here...

You spend half your working day flicking through the dictionary; “the good book”. You edit report after boring report and pretend to look up specialised jargon alternatives in the thesaurus. You are actually poring over rude words, testing your encyclopaedic knowledge of swears against Roget. You usually win; the man has no sense of imagination. You couldn’t if you invented such a complicated cross-referencing system.

The challenge gives you an idea for an art project: one you’re certain you’d get funding for. The arts lot’d love it; they’d put on their special voices and everything. You’d catalogue all your favourite naughty phrases using library coding parameters, store them on microfiche and display the results on a light box in a darkened room that adds to the suggestive atmosphere. Accompanying this would be a series of Venn diagrams: male bits intersecting with female bits; the subset of shared bits including nipples, arses, hard, panting.
Posted by Sarah-Clare Conlon at 11:48 AM No comments:

OK, so before I start getting complaints again about not updating the old blog, here you go. I've been working tres hard on the Manchester Literature Festival Blog writing posts and quizzing various writers about various things, so why not pop over and read those here.

I've also been busily squirrelling away at keeping my Wednesday promise of publishing bad words on We Hate Words. You can see that here.

Then, I've been writing another ton of short stories to submit to different zines and anthologies and wotnot and stuff and also to read at a number of upcoming spoken word events, starting with the Bad Shoes Festival this Sunday. I'm in the spotlight in the 2-2.30pm FlashTag Mcr slot in BoCho's Electrik. 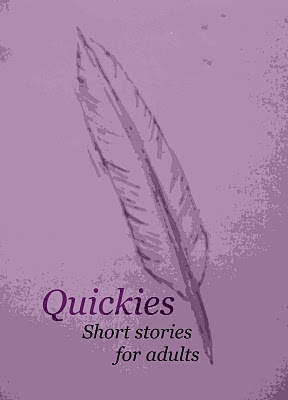 And apart from all that (and other secret and not-so-secret projects), I've been frantically organising and promoting the FlashTag Smut Night, which takes place a week tonight - Wednesday 28 September, 8pm, Northern Lawn Tennis Club, Palatine Road, Didsbury. We'll be launching our collection of filthy flash fiction, Quickies: Stories For Adults, and hosting a night of dirty readings featuring our good selves and some of the contributors to the book (a book! A real-life book!).

As I say in the press release: “I’ve been gagging to run a literary-based Smut Night for ages and this seemed like the ideal opportunity – I think an evening of tongue-in-cheek saucy and romantic stories in the curtain-twitching suburbs will go down a treat!” Oo-er missus.

Our headline act is David Gaffney, the “grandmaster of flash fiction” (Bookmunch) and “one of the foremost writers in the short fiction arena” (The Short Review), and author of three critically acclaimed flash fiction collections, Sawn-off Tales, Aromabingo (which he's just lent me) and The Half-life Of Songs, plus the novel Never Never. At Smut Night, he will be reading the story he has written especially for Quickies along with some of his other work. You should so come...
Posted by Sarah-Clare Conlon at 4:11 PM No comments:

Preparation so far for the Mills & Boon writing challenge has involved: 1) thinking a lot more than I'd expected; 2) putting on a giant sparkly ring to help me channel my inner Barbara Cartland; 3) reading the first chapters of Stay Through The Night by Anne Mather (Modern Romance), Crazy About The Boss by Teresa Southwick, Break Up To Make Up by Fiona Harper and, by far my favourite title to date, Business Arrangement Bride by Jessica Hart. (The last three are all in the Romance series; pink covers.) I am now going to come up with some character names and write a synopsis.
Posted by Sarah-Clare Conlon at 12:20 PM No comments:

Oh my giddy aunt. Mills & Boon are only looking for new blood for their Romance imprint and are after first chapters by 10 October. Aghhhh! So soon! But I said I'd apply myself to this challenge even before I knew about this particular challenge, so it seems like an opportunity not to be missed. Weekend activities sorted! I'll keep you posted as to progress via the blog and the Twittersphere...
Posted by Sarah-Clare Conlon at 6:08 PM 2 comments:

Ten days remain for you to hotfoot it over to Salford Quays to check out The Lowry's Warhol & The Diva show. I recommend that you do. It's really nicely curated, starting with Polaroids of each of the famous faces Andy Warhol persuaded to sit for him. Next, you move onto those famous huge bright screenprints. There's a fantastic Liza Minnelli, all black spiky fringe and shiny red mouth. There's a wonderful Debbie Harry, again red lipstick a-gogo, hung on an animal-print background which sets the picture off beautifully. There's Liz Taylor, there's Jane Fonda, there's Mick Jagger, and, of course, most famous of all, there's Marilyn Monroe - in fact, there are a few Marilyn Monroes. 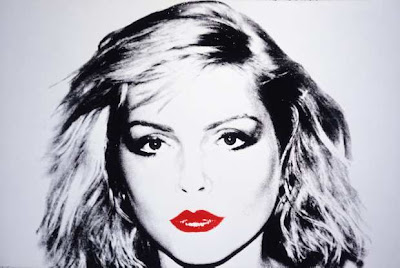 The works have been borrowed from The Andy Warhol Museum in Pittsburgh, specially selected by curator Kate Farrell. Kate has cleverly juxtaposed the portraits with photographs of Warhol wearing a wig and make-up, himself the diva to Christopher Makos's lens, and with a really interesting video of the artist undergoing his makeover, seemingly very vulnerable and nervous. There's also a corridor-type room displaying copies of Interview magazine, which used Warhol's diva images on the cover, and this provides the context of Pop Art and serves to give the exhibition extra depth.

It's a well-rounded show, and worth the trip to the windswept wastes. And it's free. No excuse.
Posted by Sarah-Clare Conlon at 5:02 PM No comments:

Uh-huh, I know what you're thinking: she's neglecting her duties again. Well, in my defence, I've been busy sorting out blogs for other lovely folk, namely, this week, Manchester Literature Festival, Tweed Ride and Cracking Good Food.

I've also been tinkering away at another ton of short stories, and today the 200-word piece about spies, stationery and sex, Names Have Been Changed, was published in issue 6 of the wonderful Spilt Milk Magazine. Tell you what, why don't you have a mosey on over there and read that...
Posted by Sarah-Clare Conlon at 5:37 PM No comments:

Haven't done one of these for a while; been too busy writing and submitting my own stuff. Sorry about that; I'll try and pay more attention to you lovely people.

This is a poetry special: the next two weeks have some great sounding bits and bobs going on all around the rainy city.

Tonight, Dominic Berry's regular shindig Poets Get Smashed is on at An Outlet on Dale Street. It starts at 7.30pm and is £3/2 in. As well as a first-come-first-signed open mic, there will be a guest slot from James Quinn.

Tomorrow, there is the Writers Forum North workshop at Madlab on Edge Street, running 1-3pm. WFW(N) is a get-together for innovative/experimental poets to share and receive feedback on their works-in-progress. You can read more about it here.

On Sunday at 1pm, poet Sarah L Dixon heads up First Sundays, a monthly writing workshop in Chorlton Library, for a mere £2.

Monday sees Anna Percy's Stirred night at Sandbar on Grosvenor Street (£2/1). Kicking off at 7pm, it includes readings of work by current and forgotten female writers, open mic (men allowed if they read a female poet’s poem) and guest readers.

On Thursday from 5.30pm the 200th issue of Michael Schmidt (of Carcanet Press)'s poetry magazine PN Review is being celebrated at the International Anthony Burgess Centre on Cambridge Street. There will be a talk by Patrick McGuinness, PN Review contributor and Booker-prize longlisted author, a discussion about poetry magazine publishing, and readings by Tara Bergin and Jeffrey Wainwright. More here.

Also on Thursday, at 7.30pm, The Castle on Oldham Street plays host to Lend Me Your Ears, a monthly night with performances by poets, authors, singer-songwriters, bands and film-makers.

On Monday 12, at 6pm, Knives Forks and Spoons Press poets Simon Rennie and Steph Pike will be reading at the Becker Room in the City Library on Deansgate. Free.

There's loads more listings for the rest of the month and beyond on this great MMU site.

Posted by Sarah-Clare Conlon at 2:26 PM No comments: 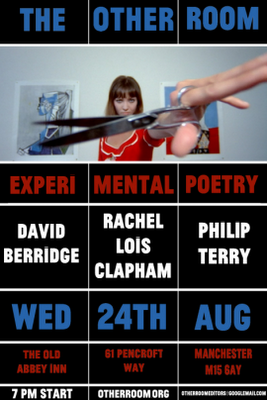 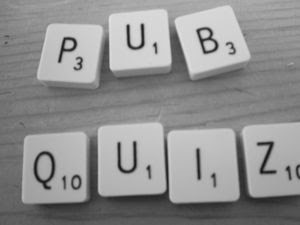