Last week, I took a wee trip to the big smoke to rendez-vous with the editors of The Literateur literary magazine and to attend the launch of the latest issue of Ambit. While I was killing time between meetings near Euston, I decided to see what was going down at the British Library, and lo, there was the scroll of Jack Kerouac's On The Road, in the Folio Society* Gallery.

The 120 foot-long scroll was banged out in three famously frenzied weeks and, though small, the exhibition is very interesting in providing information on the background of the manuscript and its context in terms of the Beat Generation, and there are some great photos of Kerouac, Burroughs, Ginsberg et al. The show runs until 27 December and is free, so if, appropriately, you have a bit of time before catching a train, bob in. 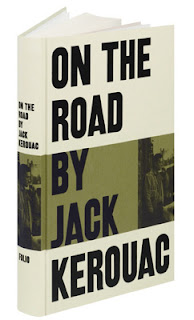 *The Folio Society, btw, republish classic books with unique illustrations, and their version of On The Road, above, has black and white photos throughout and is £29.95. Other tomes include various by British authors, such as Ray Bradbury's Fahrenheit 451, which is on my reading list for winter...
Posted by Sarah-Clare Conlon at 12:02 PM No comments:

Down and out in New Orleans

When Imogen Stubbs last appeared at the Royal Exchange, in Noel Coward's Private Lives, I couldn't stop gushing about it: it was brilliant; the best thing I've seen there, possibly even the best thing I've seen at the theatre. I was therefore not surprisingly awaiting this production of Tennessee Williams' Orpheus Descending with some degree of giddy excitement, so imagine my disappointment when it turned out to be nowhere near as good as the Coward.

The play opens mid storm, represented by thunder clashes and four large screens pouring with water. It's a pathetic fallacy, of course: the characters, inhabitants of a small town in the Deep South, all harbour poorly veiled mistrust of each other and even more poorly veiled mistrust of anyone from outside their community, and tonight, in particular, tensions are running high. A bunch of dislikeable women minding a shop are soon joined by a bunch of equally dislikeable men and, eventually, the couple they are waiting for: the store's owners Jabe Torrance, just discharged from hospital, and his long-suffering wife, Lady, an initially unrecognisable, but ultimately scene-stealing Stubbs (pictured). 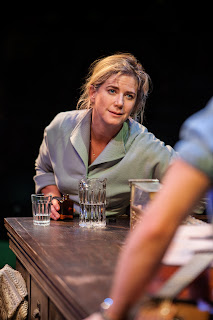 There are other arrivals, too: the wayward Carol Cutrere, who's friends with voodoo types and is not supposed to darken the town's door after being falsely accused of vagrancy, and Val Xavier, who is a guitar-toting drifter (and the titular Orpheus), but, being good-looking and having one of the local loony bible-bashers on his side as he does, is allowed to stay, at least for the time being. Val and Carol seem to have history, and there's more than a whiff of David Lynch's Wild At Heart about the pair, not least with the importance given to a particular snakeskin jacket. It turns out Lady is an incomer too, with her Italian heritage (though it took me a fair while to work that out), and this is what leads to the play's dramatic and tragic crescendo.

Unfortunately, this crescendo is a hell of a long time coming, and there are so many tiny scenes, with the lights going up and down for the briefest of appearances and random snippets of blues music punctuating the action, that I lose interest quite quickly. Another weird lighting effect, which indicates the early evening sun and, I'm assuming, aims to emphasise the increasingly uncomfortable atmosphere the script is out to portray, manages to be too subtle to make its meaning obvious, yet annoyingly nausea-inducing at the same time. There are other odd lighting choices, too, though I'm presuming these are to reference the importance of light and shadow, good and bad, white and black in a racist era and area. My final criticism is that there are way too many characters, which simply adds confusion and slows the pace down even more, and these extras seem there mostly to shoehorn in the minutest details of back history. You start to wonder if this wouldn't work better as a film, though whether that's the fault of the play or the production, I can't say.

Photo by Jonathan Keenan. Orpheus Descending continues until 24 November. See the Royal Exchange website for full details.
Posted by Sarah-Clare Conlon at 12:23 AM No comments: