I've managed to miss a load of interesting theatre productions lately, but last night I did make it to the premiere of The Man Who Woke Up Dead, the first commission by Waterside Arts Centre and sister organisation Creative Industries Trafford in their special to the stage programme, and supported by Arts Council England. 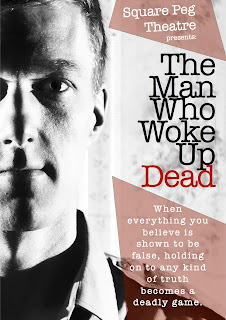 OK, so I'll confess I am biased, working on the marketing for Waterside at the mo as I am; however, I did genuinely enjoy the dystopian thriller with its interesting shadowplay and innovative stairwell scenes (depicted through movement and a change in sound, courtesy Owen Rafferty, and lighting, by Joel Clements). The set is pretty pared down, but the props that are used are done so effectively; the same with the costumes, which appear to place us in or around the Second World War, though the story could transfer into any era, past, present or future. The cast, too, is minimal - it's a three-hander, with Phil Minns playing a psychiatrist with a secret (who you wouldn't want to say, "Trust me, I'm a doctor"), and Square Peg Theatre founders Katie Robinson as Nurse Evelyn (and producer) and Michael White as the man in question (he's also the play's writer and director). Yet for something so seemingly stripped back and running to only an hour, The Man Who Woke Up Dead is full of interest, intrigue and impact, as the action unfolds and the line between truth and lies is crossed and recrossed. 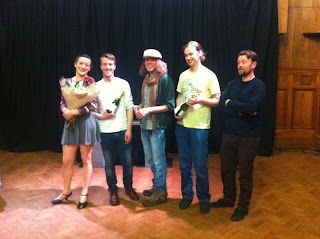 The Man Who Woke Up Dead is on tonight and tomorrow at 8pm at Waterside Arts Centre in Sale town centre. It's £8 (£6 concessions); call 0161 912 5616, book via watersideartscentre.co.uk and just rock up and pay on the door (no booking fee that way!).
Posted by Sarah-Clare Conlon at 3:07 PM 1 comment: