Since my last missive, the UK has been in a prolonged lockdown starting midnight 4 November (a free-for-all on Christmas Day aside) and 2021 has got off to a somewhat bumpy start, with the sad passing of my lovely cat Pushkin, the founder of modern Russian literature, obvs, and featuring floods, pestilence and various other shitstorms demanding my weathering. Still, onwards and, hopefully, upwards - spring bulbs are starting to shake their sleepy heads and I just noticed the honeysuckle by the back door sending forth some new shoots and leaves.

Event wise, I've had to duck out of a few I was hoping to go to, what with one thing or another, but before the festive period (or lack thereof), I did manage to visit Nottingham, where Lila Matsumoto hosted Samantha Walton (and her colleague Vicky Sparrow more recently welcomed Zarf's Callie Gardner live from Glasgow), and Sheffield, where Iris Colomb was the star of the show at the December outing for the Centre for Poetry & Poetics Safe Readings Series, hosted by Ágnes Lehóczky. 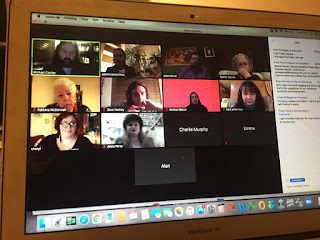 In the New Year, I listened as Lucy Burnett explained her new crossword book, out with Guillemot Press, and visual poet Derek Beaulieu and visual artist Rhys Farrell described their collaborative processes for Lens Flare, and I watched a bit of a showcase as Mau Baiocco, Kirsty Dunlop, Fred Spoliar and No Matter's Nell Osborne joined Maria Sledmere to celebrate her recent Guillemot launch alongside Kyle Lovell with his Broken Sleep Books Legitimate Snack pamphlet.

In sherry-drinking open season, I also did some readings, including on the open mic at prose poet extraordinaire Anne Caldwell's double book launch with Matthew Hedley Stoppard, hosted by Leeds Libraries, and at Rachel Davies' 4Word pamphlet launch, featuring Hilary Robinson, Kim Moore and others. I also had the absolute pleasure of collaborating with Andrea Mason for the most recent outing of The Other (pictured above), when writers swap work to read. Like me - so a very fortuitous pairing; thanks to the Fates! - Andrea is big on deploying constraints in her work and she sent me a piece made using the verbs from a source text to create her own work, which was published by Sublunary Editions. I'm super-pleased that Andrea is on the shortlist for The Manchester Writing Prize. 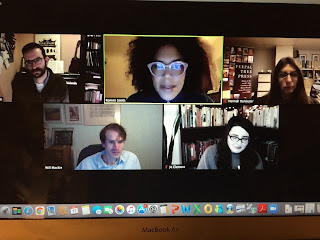 I'm still striving to develop my practice, so I've applied for a few things, not always successfully, but hey if you don't ask you don't get, and I've been putting my name down for various upcoming workshops and talks. I joined the audience for the Northern Writer Awards Roadshow looking at getting poetry published, hosted by Will Mackie, and featuring Uni of York's JT Welsch, writer Rommi Smith, Hannah Bannister of Peepal Tree Press and Jo Clement of The Butcher's Dog journal (above image). All very useful, especially as I make headway into the uncharted territory of getting my debut pamphlet out there...

Posted by Sarah-Clare Conlon at 12:21 PM No comments: