I’ll admit I had no idea what to expect from the Royal Exchange’s latest production, The Country Wife; to my shame, I’d not even heard of its author, William Wycherley. Still, the press release mentioned the word “bawdy”, so I was straight in there with my RSVP, and I wasn’t disappointed.

Taking my seat, the first thing I notice is an outlandishly attired dandy checking his talcum-powdered face and wig in a mirror, beneath an impressive chandelier of antlers and surrounded by plush chaise longues and fancy side tables. This turns out to be Mr Horner, an incorrigible womaniser who, in order to kid his fellow men of society into letting him gain unrestrained access to their wives and sisters, pretends to be suffering permanent impotence following a recent trip to France. It takes no persuading Sir Jasper Fidget, who immediately grants him escort duties to his wife and daughter, though Mr Pinchwife (a sometimes quite menacing Nick Fletcher) is less convinced, having been out of town with his new spouse Margery and therefore missing out on “the news”. The country wife of the title, Margery (played appropriately at first ditzily and increasingly minxily by Amy Morgan) wants to be introduced to society, and her husband is soon mad with jealousy as he witnesses her head turned by the fripperies of London and the flatteries of Horner (Felix Scott, knowingly roguish). 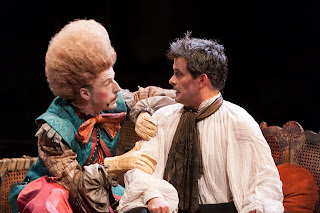 Other romantic complications arise, leading to a number of farcical entrances and exits, often symbolised by the opening and closing of various gates located at the periphery of the round, plus of course the stage doors themselves. Best of all are the shenanigans between Mr Pinchwife’s sister, Mrs Alithea, and her betrothed, the Jedwardly coiffed Mr Sparkish (pictured with Pinchwife above), whose costumes are a wonderful sight to behold, and whose delivery, thanks to Oliver Gomm’s over-the-top performance, is brilliantly comedic and rakish. The play was written to cast light on the promiscuities of the higher classes at the time and the incestuous nature of Restoration theatre (Wycherley, I have learnt from the programme, shared a mistress with Charles II, on the throne at the time), and in-jokes about theatre-going show the writer satirising his own social circles (perhaps one reason why his theatrical career spanned a rather brief five years!).

The piece might date from 1675, but by playing up the script’s colourful language (words and phrases like “homaster” and “Lady Wife Fidget, he’s coming into you from the back way” had the place in sniggers, while I enjoyed the exclamation: “No need to be so smutty!”) and using contemporary music (an interpretation of Hendrix, for example) during set changes helps keep the whole thing light-hearted and accessible, so hats off to director Polly Findlay. The only couple of things that don’t translate so well are the jarring characters’ explanatory asides to the audience at the ends of scenes, and the rhyming couplets which close the final act also stick out somewhat – but I suppose that’s the style of the time, so no matter. All in all, it’s a very entertaining piece and I very much enjoyed being introduced to the work of a playwright so old yet so totally new to me.

New review courtesy yours truly, of the latest Salt short story anthology, edited by Nick Royle. Off to see his Nightjar Press soiree featuring readings by, among others, Salt's Booker Prize contender Alison Moore on Friday night as part of Didsbury Arts Festival (which I'm running a night at on Thursday!) - can't wait!

Sorry for the short posting... more reviews of other stuff tomorrow...
Posted by Sarah-Clare Conlon at 6:19 PM No comments:

Mine and David Gaffney's "band", Les Malheureux, kick off an Autumn Tour tomorrow, with a gig over th'hills in Leeds at a night called Fictions Of Every Kind. Given yesterday's transport disaster (getting stranded in deepest darkest Cheshire when the last train to Manchester was a no-show after I performed at the first-ever Frodsham Literature Festival), I think we should consider hiring a tour bus and some roadies to ferry us about. And I definitely reckon we ought to get ourselves a rider sorted... white wine and Greggs cheese and onion pasties are top of the list. Anyway, the tour continues throughout September and October with us playing South Manchester, Kendal, Crewe, Central Manchester and North Manchester - full details on the Les Mals website. Hopefully see you in the moshpit soon, and if you want to book us for anything, let us know!

Posted by Sarah-Clare Conlon at 3:35 PM No comments: