Some of my recent proofreading work is now in the public domain, which is really rather exciting. Here's a quick round-up; if you need any proofing or editing undertaking, do tell.

Socrates Adams' debut novel hit the shelves this week, complete with a lovely acknowledgement of my fine handiwork (although publisher Tony did admit he may have buggered it up slightly, so if you find any mistakes, they're his not mine). You can pick up a copy - and I recommend you do - at Blackwell's.

David Gaffney's Errata Slips Micro Commissions project for Cornerhouse has culminated in the creation of a feature and also some fab new short stories, which were also given the once-over by yours truly. You can have a shufty at some of them here.

I've a couple of other really awesome fiction jobs in the pipeline, but I'm currently working on non-fiction, a tome about the uncanny in literature, and that's been great too. See, I can turn my hand to all sorts. I'm not just a pretty face (though obviously I'm that too. Heh, it's great having a blog; you can't write any old shite and ain't no one to contradict).
Posted by Sarah-Clare Conlon at 5:17 PM No comments:

New books on the block 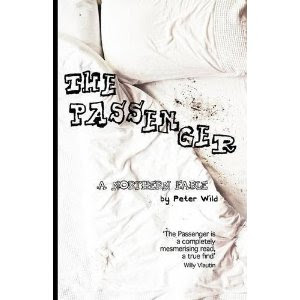 Today is the launch party for The Passenger, the debut novel by Peter Wild, another fifth of the Inklings writing group I have the privilege of being a part of. To get in the mood, I'm just listening again to the interview Pete did last night on Michelle Hussey's Desert Island Discs-for-hipsters BBC Radio Manchester show. I suggest you do too; here's a link. The launch is at Soundcontrol at 7.30pm (details here) and features a couple of local bands, plus readings by Pete, another Inkling Valerie O'Riordan, and the inimitable Socrates Adams. You can buy the book here.

Socrates' debut novel, Everything's Fine, is out tomorrow. I can't recommend it highly enough. It's completely bonkers, but good bonkers. Great imagination; lovely style. And the proofreading's fucking amazeballs (I did it). The official launch is on Friday 27 January at Blackwell's on Oxford Road, but before then you can also catch Socrates reading at Bad Language on Wednesday 25 January. He gets around a bit. More details and purchasing opportunities here.
Posted by Sarah-Clare Conlon at 11:00 AM No comments:

A quick round-up of spoken word speakeasies on the horizon...

Tomorrow sees the fourth outing for Tales Of Whatever, now in its new regular monthly slot at literary venue du jour, The Castle Hotel on Oldham Street. It starts at 7.45pm and is free, and this month's line-up includes my FlashTag compadre Tom Mason, my former colleague Laura "Cultural Shenanigans" Maley and For Books' Sake editor Jane Bradley; all of whom feature in the wonderful smut anthology Quickies: Short Stories For Adults, edited by my fair hand and available to purchase for next to nowt here.

I'm next on stage on Monday 23 January 2012 from 8pm at the new Three Minute Theatre in Afflecks, also on Oldham Street, as part of a special one-off (free!) night, The New Libertines, organised by Literary Death Match winner and Eight Cuts Gallery impresario Dan Holloway and in association with those ace For Books' Sake ladies. The bill (see poster below) also features award-winning author Elizabeth Baines and Not The Booker winner Michael Stewart, plus an open mic with Bad Language's Dan Carpenter among others, and promises to be nothing if not varied. I'm planning a 100% smut-filled set, so be warned. 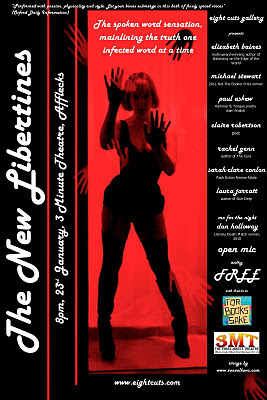 The Bad Language gang themselves (oh look, we have the same blog background - great minds think alike, eh?) is back for the new year on Wednesday 25 January (7.30pm, free, The Castle), and I'll be taking part in the open mic. Another Quickies contributor, Socrates Adams, will also be reading from his new novel, Everything's Fine (proofread by yours truly).

The next Say Something is on at The Castle on Thursday 9 February*, with ToW back on Wednesday 15 February, then, on Friday 17 February (TV 21 bar, Thomas Street, 8pm), it's the unmissable launch of the new album Death Jeans from Monkeys In Love, when the band (who "sound like a drink Stereolab") will be supported by none other than David Gaffney feat. Sarah-Clare Conlon. I'll be reading more of David's flash fiction to his musical accompaniment while also giving a PowerPoint presentation and dancing. You'd better believe it.

There's a nice write-up of literary nights this week on Creative Tourist, which also mentions the fabulous experimental poetry night The Other Room (which unfortunately always seems to clash these days with Bad Language) and also the Manchester Literature Festival hub, the International Anthony Burgess Centre.

*NEWS JUST IN: the next (and last for now) Say Something is actually on Tuesday 28 February, 7.30pm at Sandbar, £1 entry. See the Facebook page for more.
Posted by Sarah-Clare Conlon at 1:59 PM No comments:

Ah, the week when most people return to work, dragging their feet begrudgingly and wailing on about needing to detox. To celebrate my own return to perfecting the fine art of procrastination, sorry, freelancing, I've decided to give the old blog a little spring clean and makeover. Et voila. Out with the polka dots, in with the preppy stripes. So new season. Do tell me what you think.

I've also been busy squirrelling away jhoozing up author David Gaffney's website copy- and layout/navigation-wise (it needed some streamlining), and you can now feast your eyes upon my hours of toil here. I'm pretty pleased with the end result, and David hasn't yet ex-communicated me, so I guess he's ok with it too. So, if you need a website planning and writing and even building, you know where to find me.
Posted by Sarah-Clare Conlon at 11:17 AM 2 comments: