Last night, I swung by the International Anthony Burgess Foundation to wave my hanky and throw my hat in the air for Adrian Slatcher, who was launching his new poetry chapbook alongside fellow Manchester-based poet JT Welsch. Adrian's pamphlet Playing Solitaire For Money and JT's Orchids are among the first six volumes in Salt's new Modern Voices series, pictured below. 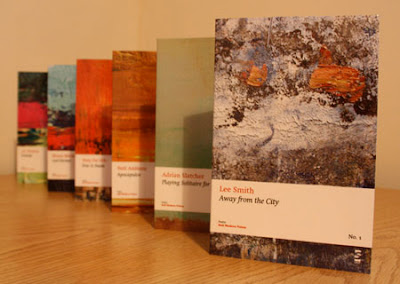 Adrian, who has previously published Extracts From Levona with Manchester's own Knives, Forks And Spoons Press, describes Playing Solitaire For Money as "a collection of lyric poems, which are contemporary in form and subject", and you can get a taster of the more personal mid-section of the collection in Late Love, which is reproduced on Adrian's proper, grown-up website (as opposed to his blog, which I usually namecheck).

He started the set with one of his older works, the aptly themed Anthony Burgess, before treating us to a few numbers from the book, and finally some more recent poems including The Maze, with its wonderfully descriptive "aristocratic kitsch", and In The Harlequin, about Adrian's current craze, Modernist sculptor Jacob Epstein (with tales of whom he was recently excitedly regaling me in The Art Of Tea, and I'll confess I hadn't the foggiest what he was going on about).

Next up, Louisianian JT's style was quite a contrast. His short, snappy lines recounted subjects as diverse as sexuality, art, love, nature. I really enjoyed the parallels drawn between tree-cutting and the economic recession in Coppice, and the lovely listing of flora and fauna on the beach in Formby. If you want to test the waters, have a shufty at The Mirror Stage here.
Posted by Sarah-Clare Conlon at 4:36 PM