The power of speech

I'm making a concerted effort at the moment to write more stories and read at more places. Last week, I performed (yep, that's the pic) three pieces of flash at Say Something, a fairly new kid on the Manchester lit block and on its third (I think) trip out, this time at The Castle (the first two were at the Lass O'Gowrie). It's run by poet Zach Roddis, who I know from the Bad Language monthly spoken word nights, and it is tipped in favour of poetry - only myself, my FlashMob colleague Fat Roland and Bad Language's Dan Carpenter read prose. Still, it was a good event and well done to Zach for getting a regular slot at The Castle on Oldham Street. Follow him on Twitter (@zach2504) to find out when the next one is happening. 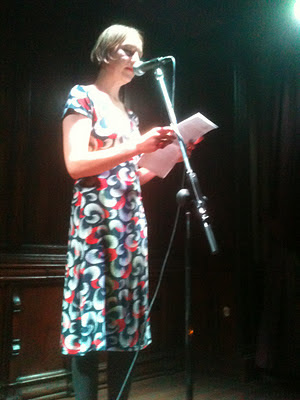 Also now going steady at The Castle is Mark Powell's Tales Of Whatever, a spoken word night with a difference: basically recounting a true story live and without notes (a bit like The Moth on the other side of the pond). Six story-tellers (including open mic, if you get inspired on the night) get around ten minutes each, and all three ToWs so far (September, November and last night) have been entertaining, interesting, informative and even emotional. They're the second Wednesday of every month and the next one is Wednesday 11 January; all the upcoming dates and details, and even some recordings, can be found on the ToW website.
Posted by Sarah-Clare Conlon at 2:41 PM