Proof that I have most definitely finally lost it has to be signing up for the 24 Arty People project, which takes place tonight. From midnight Friday through to midnight Saturday, myself and 23 other creative types will be split into groups of four to create six completely new site-specific pieces at the Contact Theatre in Manchester. Twenty-four people, 24 hours without sleep - really, what could go wrong? Having been following the various conversations going on between project participants on Twitter, I can at least be thankful that I'm not the only one absolutely bricking it and wondering how to get through the night without having a breakdown or resorting to class As. Having been following the various conversations, however, I can also confirm that I appear to be on average twice the age of most of the others. Perhaps I'll get special treatment for being an old biddy, like being waited on hand and foot with gin and tonics and everyone turning a blind eye to how often I have to resort to bed rest. I'll blog again on the other side, but you can follow Tweets via the hashtag #createnotsleep (so modern). The project has its own Twitter feed - @24contactmcr - and I've created a Twitter list called createnotsleep, if you want to see what everyone taking part is saying. In the meantime, each of the six pieces will be performed to the public on Saturday at 8pm, so come down and have a laugh; booking details here. 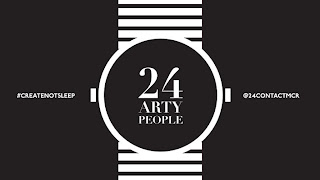 Posted by Sarah-Clare Conlon at 3:00 PM