Men Who Like Women Who Smell Of Their Jobs

…is the name of a new exhibition at The John Rylands Library, which launched this week as part of the Manchester Literature Festival 2014 offer, and takes as its start point David Gaffney's short-short story collections Sawn-off Tales and More Sawn-off Tales. Of course, I'm by no means biased in favour of the show, but why bother coming up with my own witty moniker for this post - that one just can't be beat. I've been working on the PR on behalf of David and the visual artist who has interpreted his work, Alison Erika Forde, and the title has helped garner plenty of column inches. "If we were giving out awards for the best exhibition title of 2014, the bookies money would be on Men Who Like Women Who Smell Of Their Jobs," says The Skinny. "Possibly the weirdest exhibition title ever," Emerald Street said yesterday on their weekend round-up of things to do. There was a great spread in the City Life section of yesterday's Manchester Evening News (we got more space than Kate Tempest, natch) and Creative Tourist have had a private tour of the show and should be running something on Monday, so watch that space. 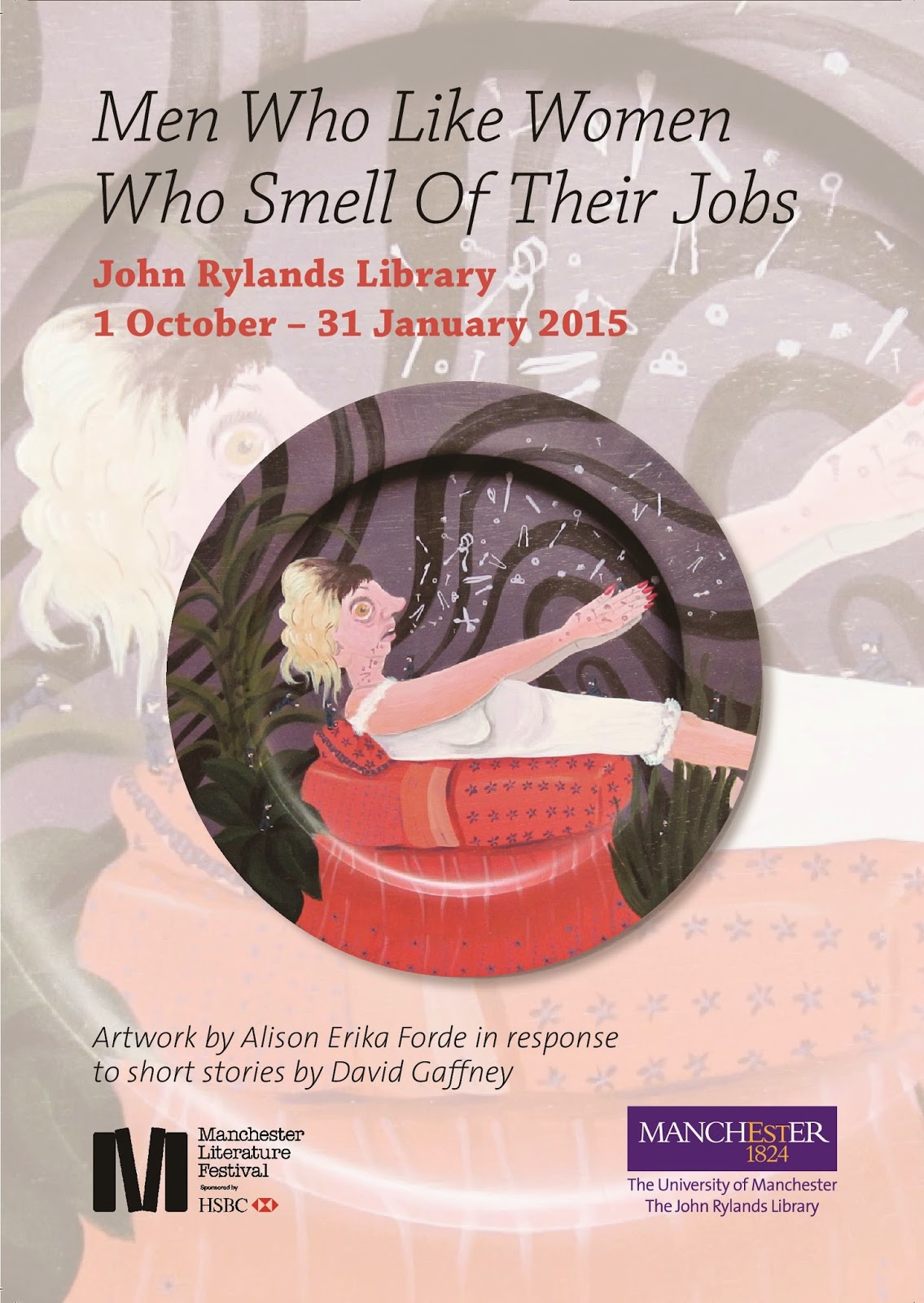 Men Who Like Women Who Smell Of Their Jobs (the title is based on a story in More Sawn-off Tales called Reekers, which involves a woman who works in a gelatine factory - inspired itself by one of my anecdotes, dontchaknow) launched officially on Thursday evening, with a bells and whistles event that saw upwards of 175 people - including some of the great and the good of the literati and arts scenesters - gather in the cafe area of The John Rylands new extension. They were treated to David reading some of the stories that feature in the exhibition, plus some more, followed by new work by Anneliese Mackintosh and Socrates Adams, inspired by the paintings inspired by the stories. Alison explained a little about her creative process and how the project came together, then Kevan Hardman described the involvement of O>L>A, an ambient two-piece including Dean Jones, before the pair played live in the lovely gothic part of the library - compositions inspired by the stories, the artwork and the building, and described by my electronica expert pal Fat Roland as "all plaintive and grand and spooksome". The exhibition continues until 31 January 2015 and is free entry. I'm off to have a proper shufty at it in a mo...

Posted by Sarah-Clare Conlon at 2:25 PM