It's been four months since 1,000 volunteers willingly (and without the influence of alcohol) stripped off in Salford for photographer Spencer Tunick. The Lowry commissioned the living installation to celebrate 10 years of wind-swept life on the Quays, and the weather on the weekend of the shoot was characteristically breezy as ever. I knew of the project - in fact, I know someone who got their kit off for it - but it wasn't until I heard curator Katie Farrell (at the last Blogmeet) describe the pressure of priming people and places that my interest in the show was properly piqued. 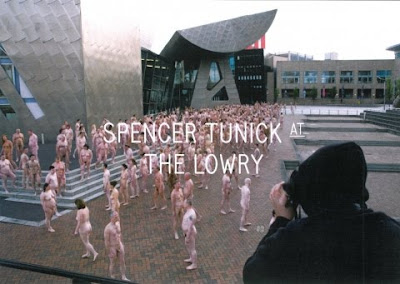 The exhibition runs until Sunday 26 September in (thankfully) the larger gallery space, and I was pleasantly surprised by how many pieces it includes. The website tells me only eight locations were used, but it feels like much more thanks to the variety of poses and props. Double-decker buses are a humorous platform for one diptych; the snaking queue to a hand carwash another. Some of the compositions echo the paintings of the art space's namesake LS Lowry with, for example, Castlefield's rusting railway viaducts a backdrop to the bodies going about their business. Colour is an important motif, with pretty pink blossoms reflecting naked skin and the participants planted like blooms in the laid-out rose gardens of an old-fashioned ornamental park. Elsewhere, in the airport set, a sensation of movement is achieved through the gradual change in stature of the "statues".

One criticism would be the stilted effect the unnatural posturing undoubtedly has, but Everyday People still has plenty of merits, not least trying to spot where the photos were taken and how it was possible to take them without some naughty passerby managing to get in on the act.
Posted by Sarah-Clare Conlon at 4:44 PM