I'm having a hiatus. I don't think it needs surgery, but I'm insisting that it involves plenty of bed rest. As a result of this extended break from office life, I spent my last week (last week) not only trying to facilitate some kind of work handover but also running hither-thither round town checking off tasks and visits from my current inventory of extra-curricular cultural excursions.

One such list entry was a long overdue trip to Manchester Craft & Design Centre to peruse the Threadbare show, as promised right here on this blog, ooh, a while back.

I was, it has to be admitted, slightly underwhelmed. Debbie Smyth's work is definitely interesting - black cotton (with focal points of blue) looped around pins to create a picture (think 21st-century take on those 1970s kaftan-swishing art teacher numbers so rarely found in charity shops) - but Threadbare turned out, disappointingly, to be less of an exhibition and more of an exhibit. 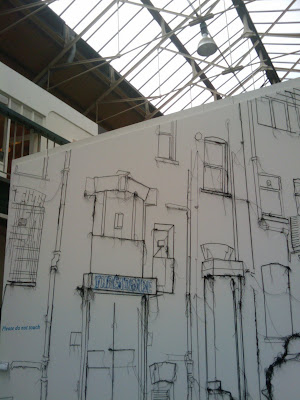 A large piece extends over two perpendicular walls in the light-diffused main space, and while I felt a tad unsure about stepping up onto the white dais to squint at things close up, I'm pretty certain this (the stepping up, not the squinting) was intended, as otherwise you'd need to have brought your opera glasses to read the info panel in the far corner. The scene depicted is the Northern Quarter streets surrounding the Craft Centre (a nice touch for this special commission), complete with air con units, metal rollershutters and lonesome road sweeper. The perspective and detail already have merit in themselves before the threading adds an extra creative dimension; giving the artwork a pen and ink feel while simultaneously having the effect of softening the lines. 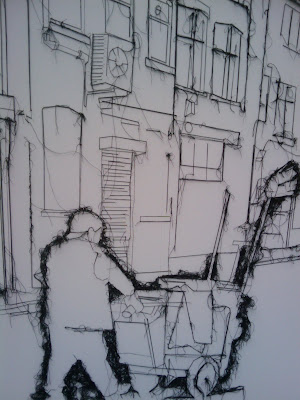 Threadbare does also include a number of smaller pieces, including a rather beautiful bear, but these are displayed in glass cabinets round the back of the main number. In fact, they're in the cafe area, which is great if you're enjoying a coffee and cake but rather more of a strain if you have to crane over the heads of those people innocently relaxing with a mocha and a muffin. Ah well, if you go with the intention of seeing just the main piece (and you have until 30 October), you'll not be disappointed.

Now, if you fancy getting crafty yourself, the artist Debbie Smyth is giving two classes on textile sketching, and the first is today (the next is on Saturday 9 October, which gives you a little more warning!). Starting at 10am, the workshops run until 4pm, and a full day is just £30. Call 0161 832 4274 or email exhibitions@craftanddesign.com.
Posted by Sarah-Clare Conlon at 8:09 AM