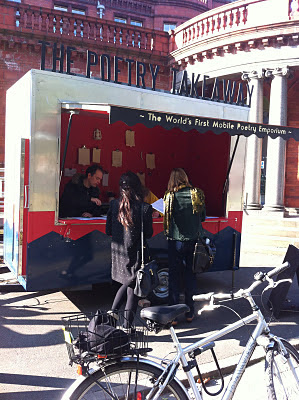 But I've also been getting a bit of a poetry fix, and today swung by the Whitworth, where the Poetry Takeaway van had pulled up (pictured). "The world's first mobile poetry emporium" was great fun - you divulge some secrets to one of the three poets therein (including someone from the well-renowned Bang Said The Gun) and they spend no more than 10 minutes rustling up a piece based on your witterings then perform it for you and provide you with a copy, wrapped in a kind of takeaway packet. My poem, Multi-task, was scribed for me by none other than exuberant "local" lad Dominic Berry, who I know from Bad Language; I can't believe what a genius creation he came up with - complete with the word "ladyparts", which I just knew I shouldn't have told him about, but which fits in well. It's brilliant and he's going to post it up on his blog soon, so watch his space.
Posted by Sarah-Clare Conlon at 3:41 PM