Getting out and about

Next week, I'm taking my potty mouth out of the goddamn rainy city and heading first south and then north to peddle my smut.

Wednesday 28 March sees me in Oxford, purveying my prose in a fight to the death with a bunch of poets (well, hopefully not quite to the death) as part of the Not The Oxford Literary Festival, organised by the delightful Dan Holloway of Eight Cuts. I'm aiming on reading four filthy and not-so-filthy flash fictions in five minutes flat. I need to practise speaking real quick. I'm also going to be performing a couple of Les Malheureux numbers with David Gaffney - and to plug our act, we've interviewed each other on the Eight Cuts blog. To say I'm really looking forward to the night, and meeting some writers I really respect (Tania Hershman for one) and catching up with some others I already have the pleasure of knowing, is a mighty understatement. Also can't wait to see the Albion Beatnik bookshop - I've heard so much about it! 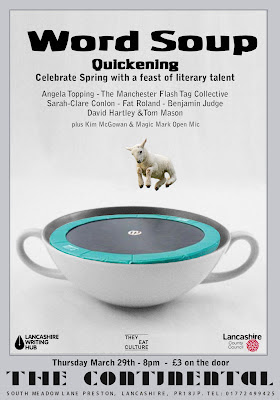 Thursday 29 March sees me in Preston, with a 10-minute slot of smut at Lancashire Writing Hub's Word Soup night at the Continental. The rest of the FlashTag collective are also reading (and an interview with us will be appearing on the LWH website in the run-up to the event) - it's like we're on the bill or summink - as is one of our Quickies contributors, the lovely Kim McGowan, and my poet mate Miles Hadfield. Preston won't know what's hit it. Still, I'm sure England's newest city (is it still that?) can take it; they're made of stern stuff up there.
Posted by Sarah-Clare Conlon at 1:52 PM