If you've been watching closely, you'll have seen me wittering on about a couple of recent performances I've done with my author friend David Gaffney, wherein I read a number of his micro fictions while he accompanied me with some original organ music composed especially for the purpose. Well, after taking off the roof (yup, I'm so Westwood, me) on both occasions, we've decided to run with this thing and aim to carry on gigging, with more whistles and bells (ie an extended set including some of my stories). Our next booking is Sounds From The Other City on Sunday 6 May, which is really rather exciting, and we've even given ourselves a band name for the occasion: Les Malheureux (the poor devils). 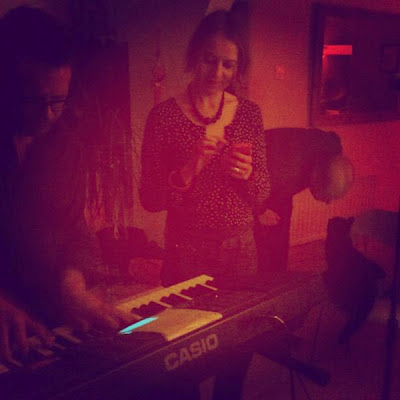 Last night, we laid down our tunes and six stories for an upcoming radio slot, and they'll be uploaded to the brand-spanking new Les Malheureux section on this very blog once they've been mixed by sound engineer Steve (communing with Judy the cat in the picture above). In the next couple of weeks, we'll also be doing some interviews, so I'll stick the links to those up as soon as they've been published. All I need now is to come up with an appropriate rider, and I think my rock star credentials will be sorted.
Posted by Sarah-Clare Conlon at 5:46 PM