OK, so Manchester International Festival might have taken over somewhat, with spoiler alerts on Twitter and Willem Defoe sightings in the street, but the thing I'm most looking forward to right here right now is Means Of Feedback, which gets underway at CUBE Gallery a week today. The exhibition showcases new and recent works by three emerging visual artists, Nicola Dale, David Ogle and Nicola Ellis, all represented by the brand-new Mark Devereux Projects team. Next Thursday sees the show's preview and also the official launch of MDP, described on the website as: "a new artist production-development organisation established to help increase the national and international profile of early-career visual artists".

It's a really interesting initiative, giving support and direction to help three new artists per year get their work out there, seen by the right people and marketed to the optimum. And it's not alone on the Manchester scene: off the top of my head, I can think of Creative Industries Trafford (aka CIT), which offers professional development opportunities to artists and creatives in the form of networking events, portfolio surgeries, scratch performances and writing workshops and conferences; Redeye, The Photography Network, which runs masterclasses, network events and an annual symposium, and gives members access to directory listings, bursaries, jobs and competitions; and Blank Media Collective, which takes us full circle, as Mark Devereux founded Blank Media in 2006 and directed it until a year ago. All these organisations are Rainy City based, but all have a much wider reach. As Mark says of MDP: "Already since making my idea public in January, artists from not just the North West but from around the UK have contacted me and we’ve met to talk about their work.” 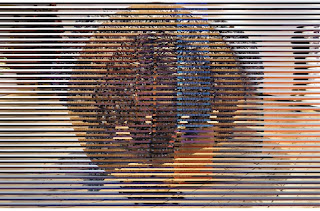 The two Nicolas and David are the three inaugural artists on MDP's books, and already have impressive shows behind them. Nicola Dale showed as part of The First Cut at Manchester Art Gallery last year and starting today (and running until 21 July) as part of Durham Brass Festival is Intone, her collaboration with composer and writer Ailis Ni Riain - who, coincidentally, is behind the second theatre production co-commissioned by CIT, mentioned above, and Waterside Arts Centre. (The last post on this blog, by the way, was a review of the first of these to the stage commissions, The Man Who Woke Up Dead, which is off on tour as a result of its successful three-night run in Sale; so fingers crossed for Ailis' A Shadow On Summer this October.)

You might remember Nicola Ellis's piece Paregro which was part of the FOUR exhibition at Cornerhouse earlier this year - a creature made out of flinty pebbles, which, thanks to Arts Council insider information received by Words & Fixtures, was apparently taken upstairs to the Cornerhouse galleries using a special robot - how exciting!

I recently saw a David Ogle piece as part of the Catlin Art Prize in hipster Shoreditch in that there London - a great geometric sculptural light installation (very now, given the Hayward's recent Light Show). For Means Of Feedback, he has apparently developed a new site-specific work - can't wait; we all know about my obsession with site-specific stuff (more on that next week!).