I had time to kill before going to see Lemn Sissay last week, so I took advantage of the new extended opening time (until 8pm Tuesday to Saturday) at the Cornerhouse galleries.

First up was Mexican artist Carlos Amorales, tying in nicely with the Spanish language film fiesta, which continues until Saturday. On the surface, this show seems a little on the minimalist side, stretching to just two works, yet both turn out to be pretty substantial. Psicofonias, described in the bumph as a "virtual pianola", features two parallel designs of little white dots sliding down a black screen and triggering a piano and harpsichord soundtrack. Initially, it seems jarring and confused, but I found myself increasingly lulled as I became mesmerised by the interacting sound and vision. Discarded Spider (pictured) is much more attractive than its name suggests, showing the shadow of Amorales as he takes on the arachnid role and tweaks together pliable wire to create giant cobwebs which then blow gently in an artifical breeze. 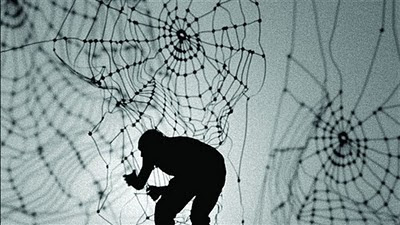 The next two floors house a rather more extensive exhibition, by Manchester-based David Mackintosh, which runs until Sunday. The Edge Of Things largely consists of some pretty basic gouache daubs on plain paper, in plain frames on plain walls. Some of the daubs are partnered with naive wording and even transformed by stop-motion into an animation sharing the name of the show; some overlay rather more skilled line drawings (a falcon; a typical museum marble sculpture). At the far end of the top gallery, a dark forest draws you in. It's the best thing here, creating a real sense of atmosphere and intrigue, but on closer inspection even this disappoints as it becomes apparent that The Woods is merely a temporary vision - painted, as it is, directly onto the wall, just missing the fixtures and fittings. Sigh.
Posted by Sarah-Clare Conlon at 3:19 PM