Am dram, thank you mam!

Chorltonites are spoilt for choice when it comes to amateur dramatics: I think I've seen three am dram groups in action in recent years. There's the Manchester Athenaeum Dramatic Society, who put on productions at St Werburgh's Church Hall and cater primarily for the older audience (when I saw The Hollow by Agatha Christie last year, there were two intervals and one old dear had to be taken outside mid-performance after having a funny turn).

Manchester Road Players work out of the Methodist Church Hall on, er, Manchester Road and they like a good sing-song round the old Joanna, love a farce (Out of Order; Noises Off), and serve tea and custard creams in the interval. They're losing my custom this week, however, as their latest show, Uproar In The House, clashes (rather short-sightedly, I'd say) with my favourite am dram lot, Chorlton Players at St Werburgh's. 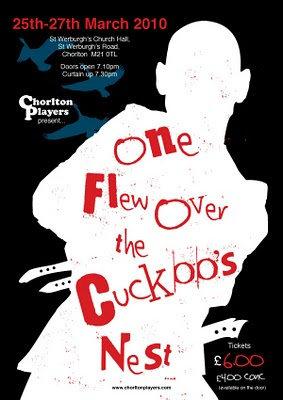 CP's page-one description on Google is "An active, non-arsey, theatre group based in Chorlton-cum-Hardy, South Manchester. Not so much a drama group - More a way of life". I concur. Chorlton Players usually pick modern classics - Woody Allen's Play It Again, Sam; Mike Leigh's Abigail's Party; The Graduate and, um, A Midsummer Night's Dream - and you can even quaff tinnies, bouteilles and cheap G&Ts throughout, or "medication" as they're calling it this week, tying in with their psychiatric ward-based play One Flew Over The Cuckoo's Nest.

The current show is possibly one of the best I've seen from them, and it's on again tonight and tomorrow at 7.30pm. There is some brilliant acting - as am dram, you tend to anticipate a certain amount of fluffed lines, crap accents and nervous giggling, but this is practically professional standard. Standout performances have to be Jamie Laidler in the role of Randle P McMurphy (the character Jack Nicholson plays in the movie version) and Alexis Tuttle as the inimitable Nurse Ratched, but there are also some great portrayals of volunteer crazies Dale Harding, Billy Bibbit and Charles Cheswick by Simon Parkin, Dennis Keighron-Foster and Rohan Shenoy respectively. Even the supporting roles are well executed and, as I've come to expect from this lot, the set is brilliant, the props are amazing and the costumes are really well sourced. Highly recommended.
Posted by Sarah-Clare Conlon at 10:34 AM