As promised, the first of three ramblings generated in a Paper Planes creative writing workshop at the weekend. The starting point for this one is the line "attached to the earth by a thread", which was selected at random by Happy Accidents workshop organiser Anthony Sides from his co-coordinator Steve Waling's poetry collection Travelator.

Attached to the earth by a thread, I look down on a verdant blanket dotted with multitudinous multicoloured jewels. It's funny how the flowers return every spring at the mere glimpse of the sun, once the bright white fields of snow have ebbed to nothing. The light is still dazzling up here in the thin air, but in a different way in this summer-filled mountainscape. A gentle breeze tumbles down the slope I'm climbing up, but dangling above. The chairlift swings slowly to a special rhythm all its own... (89 words) 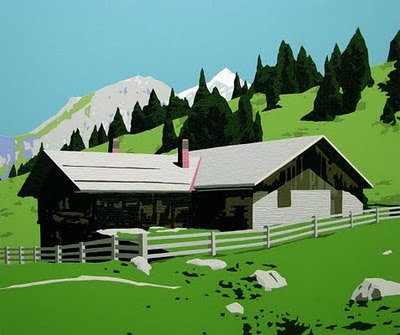 Lots of the people in the class wrote about balloons, either traditional kids' ones like in Le Voyage du Ballon Rouge (a weirdly interesting film set in Paris and starring the fabulous Juliette Binoche) or the ones full of hot air. That did cross my mind, but I thought (obviously correctly) that it was a bit of a cliche, so I went with the Alpine story instead, inspired partly by my sister-in-law going through the process of ski lodge puchasing in the French Alps and partly by artist and new online friend David Wightman concurrently and coincidentally creating some new works of Swiss chalets.
Posted by Sarah-Clare Conlon at 12:00 PM