Two out of three. For this exercise, we were given the following subjects to incorporate into a story, either all or just some: a new house; two people who look like each other; a hospital; cheerleaders; some diamonds. There were some slow starters, so the line "apples are nice" was also offered up to help get things underway in the face of writers' block or despondency. I used neither the opener nor all the subjects, for fear of the story turning into an episode of Holby City.

We'd been at the new house a little over a week when she came to the door. John and I were in the dining room, hemmed in by boxes from the move. Despite the stifling heat, we'd agreed to try and unpack as much as we could, and we were sitting marooned on a patch of carpet, surrounded by a sea of scrunched up newspaper and floating palaces of glass and crystal. The doorbell shook us from our lethargy, but John was the first to his feet, plotting a clear passage though the expensive wedding present debris. He told me later how odd that in itself had been, let alone opening the front door to a woman the mirror image of his wife. (123 words) 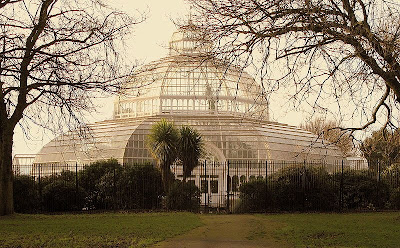 Reading this back brought to mind the time I was stuck in Liverpool a couple of years back waiting for the weather to improve so I could sail the Irish Sea. I spent a pleasant afternoon pottering around Sefton Park Palm House - a lovely glass house and mini Crystal Palace - and the once glorious park, which seemed home to the entire Merseyside mistle thrush population that day.
Posted by Sarah-Clare Conlon at 12:15 PM