It's all about me

Last week, some survey by some person somewhere revealed that Manchester is the third biggest European user of Twitter. We come after London and Paris, so we're in good company. It goes without saying, but I will anyway, that I have lived in all three of these hip'n'happening cities and no other conurbation (unless you count Liverpool which I inhabited for perhaps as long as a month).

Anyway, as if to prove the Rainy City's position of social media status, yesterday was a busy old day in Manchester's interweb.

First off, some bloke from The Guardian did some live Tweeting travel feature thing: "armed only with a mobile phone – and ready to go wherever the best of your tweets take him". He was called Benji Lanyado and it was called the TwiTrip. Yawn. Still, somehow me, along with many of the other regular Manc Twitterers, got sucked into the whole thing and started blatantly self-promoting and showboating, and desperately bigging up places for this bloke to go in a "my suggestion's better than yours" kind of way. I was finally namechecked at about 7pm, along with my Chorlton mate Gill: "@benjilanyado: Instalations at the Cornerhouse, thanks to @Wordsnfixtures @Gillmphoto & @popisthis http://flic.kr/p/8tt24N". If you're remotely arsed, you can see the TwiTrip to Manchester in its entirety here.

Secondly and very bizarrely, @wordsnfixtures starting trending on Twitter. WTF? This is what the Tweet said: "@TrendsManc: Sarah-Clare Conlon, @wordsnfixtures is now trending in #Manchester http://trendsmap.com/gb/manchester". My colleague Josh (aka @technicalfault) loudhailed this announcement across the office (which was rather embarrasing as it does probably mean that I'd spent more of the day dicking about on Twitter than doing any actual work. And we all know that such a thing would never happen, right? RIGHT?). He then showed me how to do a screengrab, for proof, like. Look, I'm right at the top, above that Benji bloke: 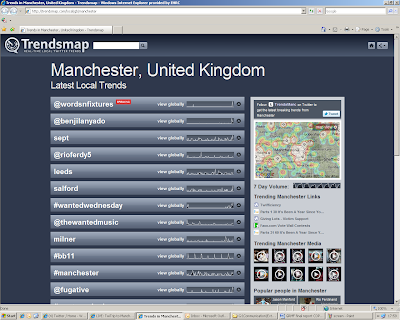 Thirdly, the first-ever South Manchester Tweet-up chugged back some ciders and shimmied into its sparkle boob tube for a night out in Didsbury Village. Such a glamourpuss, this latest social media mover and shaker has not one, but two hashtags: #southmcrtweetup and #southmanchestertweetup. Organised by Tom Mason (@totmac) and Nicola Cooper-Abbs (@ncooperabbs), the get-together went swimmingly with quite a gaggle of creatives, SEOs, PRs, developers, local business reps and even some "normal" folk, and lovely Laura from Airy Fairy Cupcakes put on a spread of sweet treats. Didsbury Life's Helen (who I didn't recognise because I am a complete dunce, although, in my defence, it has been a while) is going to do a write-up about it, so look out for all the action shots down on the DL blog. Rumour has it the next SMTU might be in Chorlton. Hold on to your hats, kids, I'll be able to crawl home!
Posted by Sarah-Clare Conlon at 4:55 PM