You would have to have been deep in the Amazonian rainforest not to have noticed the recent pinnacle reached in cupcake outlets and home baker delivery services in Manchester, and, in honour of National Cupcake Week starting today, I thought I'd do a quick round-up of the sweet treats vying for your attention before anyone else yawns and says they're bored of the whole thing.

The original destination outlet in Manchester, Sweet Tooth Cupcakery of Chorlton and, since 7 June, Oldham Street (pictured), offers up the official Cupcake Week flavour for Wednesday with award-winning baker Vicky Parker's Ernest Hemingway creation: ginger cheesecake base with a vanilla and lime sponge, lemon and lime curd and a toasted meringue topping. I popped into the Northern Quarter "milk bar" branch for a vegan chai-flavoured David Lynch (see bottom photo) and a damn fine coffee with co-owner Fred Royle, who gave me the skinny on his and wife Lorna's business USP: creative, nicely retro, with plenty of Northern charm. On 25 September, Sweet Tooth's Vicky is teaming up with Ministry Of Craft to run a two-and-a-half hour cake-decorating workshop (a second follows in October), while the Sweet Tooth Cupcakery (who you can follow on Twitter at @Sweettooth_UK) is also up for Best Newcomer in this year's Manchester Food & Drink Awards: winners will be announced at a special ceremony during the Manchester Food & Drink Festival on 11 October. 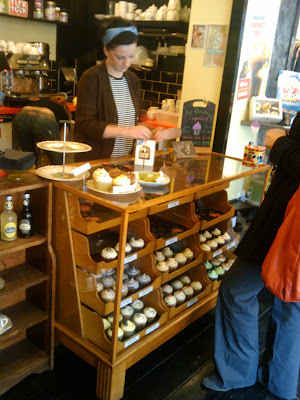 Afflecks-based The Cocoa Emporium vintage cafe and cakeshop offers competition in the Northern Quarter (more on that here). Also in on the trend is Hey Little Cupcake, whose Sex And The City-inspired, Prestwich-based MD Sarah Wilson (@HLCupcake) cottoned onto yet another concept imported from the States: the pop-up shop. She'll be manning her temporary retail space in Spinningfields for the next week or so if you need a sugary hit while in town. Oh Crumbs! Cupcakes (@ohcrumbscupcake) also supply a number of city centre venues once the pop-up place folds.

Out in the suburbs, Chorlton-based Peach Pie was recently tried and tested (Michelle and Vicky's caramel shortbread was a sugary hit in more ways than one) at the last (and possibly last ever) Didsbury Food Market, as was a moist and fluffy slice of classic coffee and walnut sponge cake from And The Dish Ran Away With The Spoon (@dishesandspoons). Another husband and wife team, Anna and James are due to open a new shop and tearoom later this month on hipster-rich Burton Road in West Didsbury: you're spoilt for choice here, with other establishments, including Silver Apples and Folk, also selling homemade cakes. Also in Didsbury is home baker Airy Fairy Cupcakes, with ex-marketing gal Laura (@airyfairycakes) getting in on the social media scene and supplying boxes of blue-iced beauties for the inaugural South Manchester Tweetup in August. 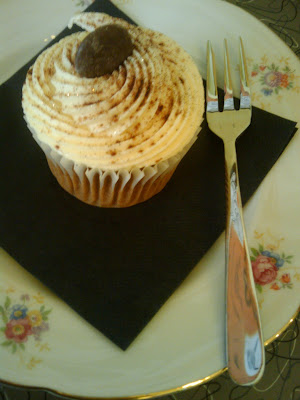 Finally, although it is slightly off message, there's The English Rose Bakery, whose Emma Brown (@englishrosebkry) has cunningly eschewed the cutthroat competitiveness of cupcakes to shower Manchester with the niche macaroon. Flavours include the company's signature English Rose, plus almond, chocolate, pistachio, Earl Grey, caramel and vanilla. She plied the recent Parlour Chorlton opening bash with a "macaroon tier", whatever that may be. The only thing is, I'm just not sure I'm a fan of macaroons. I'm still trying to acquire a taste for almonds, and, allegorically, I'm still stuck puking on the side of a mountain having been dragged up here by overly Gore-Texed Alpha males trying to prove that the panorama will be worth it. One day I may well see the view and be amazed, but until then I'm not complaining about the cakes.
Posted by Sarah-Clare Conlon at 10:16 AM