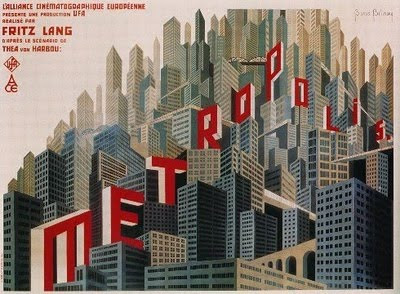 Last night I went to see Fritz Lang's 1927 crazy futuristic sci-fi silent movie Metropolis at the Cornerhouse. I was very excited about this as: a) I haven't seen the film for nearly 20 years as it never seems to get shown (that first time was in no less than the hugely imposing Palais de Chaillot, opposite the Eiffel Tower, yes in Paris, in a special bunker-like screening room; something, I think, to do with La Cinémathèque française); 2) I thought I'd missed it this time as when I was due to go last week I was feeling poorly and pathetic, and I thought it was only going to be on during Manchester Science Festival (23-31 October); iii) it's a scrubbed-up print with new footage they (whoever "they" are) found in Buenos Aires, of all places. Then I got very very excited because I noticed on the ticket while chowing down on my scrummy three-bean and preserved lemon tagine that it was on Screen 1. Oh man. 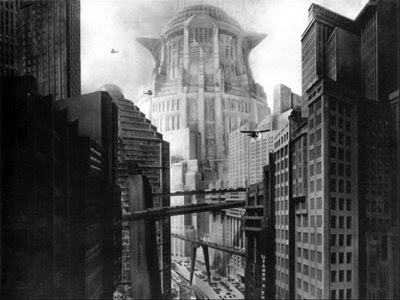 It didn't disappoint. Dystopia. Modernism. Maschinenmensch (great word; love German). Flappers. Art Deco. Brave New World meets The Great Gatsby tipping a wink to Alphaville and 1984 mixed with Bladerunner and The Fifth Element sprinkled with Indiana Jones And The Temple Of Doom and even Back To The Future. Oh, and let's not forget Frankenstein and even a bit of scary shadowplay à la Nosferatu. 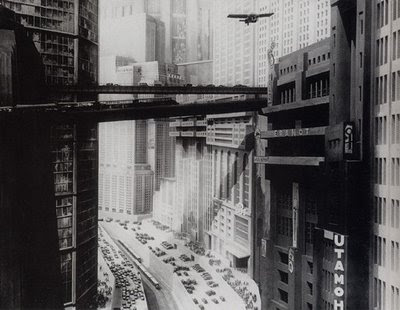 It was good. And it made me think of that show at the Whitworth Art Gallery a year ago, The American Scene: Prints From Hopper To Pollock. Compare the lithograph New York by Louis Lozowick from 1925, below, to the stills and poster from Metropolis, above. Credit for the film artwork and sets goes to Erich Kettelhut, who was apparently art director, set designer, trick photography (special effects), painting effects (visual effects) and technical consultant. But still, similar, non? 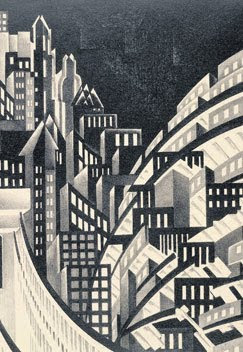 Posted by Sarah-Clare Conlon at 4:24 PM