My fifteen-year-old self would be proud: I am finally part of a scene. It might have been totally made up in a tongue-in-cheek manner after the consumption of a certain amount of alcohol on a loud evening in Common last Friday, but it's still a scene. A literary movement, if you will, which is handy as I have that as a blog label, and it doesn't get used half as much as I'd like. The scene is called the Beatoff Generation, a nod to various previous scenes and a tidy attempt at "blue" humour, and it even has a Twitter hashtag. Plenty has already been written about the scene, and you can read various other #beatoff members go on about it so I don't have to.

There's Fat Roland On Electronica with the snappily entitled "The Beatoff Generation: Our Future Books Shall Bleed From Your Shelves Like A Hardback Elixir Reddened From An Embarrassment Of Grammatical Riches", complete with a whole ton of comments. Then there's "#beatoff - Generation Hashtag" by Sam Bail, editor of B&N Magazine. Adrian Slatcher cottoned onto the excitement, writing "The scene that celebrates itself" on The Art Of Fiction, while Who The Fudge Is Benjamin Judge? gave us "...and then I Made Fridge Magnets". And he did too, and handed them out to the great and the good gathered last night at the launch bash of Bad Language's Scattered Reds anthology, which features one of our very own (Dave "@lonlonranch" Hartley, the brains behind the all-new Screen150 site). Here are the fridge magnets. As @FatRoland said: "Did Kerouac have fridge magnets? No he bloody did not." Well, quite. 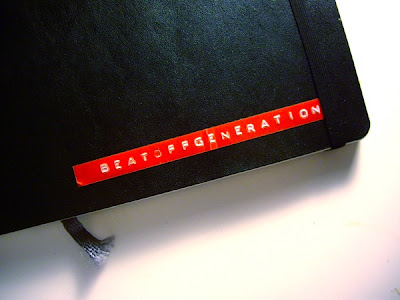 So in the spirit of the Beatoff Generation - which is all about writing, reading, collaborating and quaffing - a core number from the group, a critical mass, took part in the open mic slot (after first taking some Dutch courage). All were short short stories; a nod, perhaps, to National Short Story Week. Fat Roland, introduced by lovely Dan Carpenter as "one of the founding members of the Beatoff Generation", was ultra cool and confident in his first-ever short story presentation (the brilliantly leftfield Sandra Sue). Tom Mason (who discusses the evening's proceedings on Audioboo: #beatoff and Bad Language) brought us Lions Not Yet Available, his fabulously inventive tale of umbrella-taming in the Rainy City and his latest offering on the 330 Words writers site he curates. I was announced as "another #beatoff writer" and gave the crowd Glasshouses, a new piece of flash fiction that will shortly be appearing on the revamped relaunched Roy Keane's Lucky Scarf, a collection overseen by magnet-maker extraordinaire and my Ask Ben & Clare colleague Ben (who joined in the drinking, but didn't read because he's stressed and self-loathing about his current novel-writing shenanigans).

Wanna be in our gang? We'll be at Waterstone's Unannounced on Saturday, 6-9pm - join us.
Posted by Sarah-Clare Conlon at 11:12 AM