On Thursday, it rained for the first time in many days, perhaps even weeks. Still, a bit of dampness didn't put off a trip to the International Anthony Burgess Foundation, where Pandril Press were launching their first anthology, Panopticon.

This, we were told, is the product of a year of writing and editing by a group of seven writers who got together through the masters in creative writing at Manchester Metropolitan University, class of 2007. The seven were never introduced, which is a little odd (also odd was that we were specifically instructed not to clap after each reading), but I have deduced from their Facebook page that they are (left to right): Dave Chadwick, Ros Davis, Alison Jeapes, Paul Beatty, Lucia Cox, Iris Feindt and Nicky Harlow (not pictured). 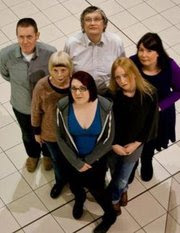 The readings were split into two themes: "lost in translation" and "weird love". Iris kicked off the first half with a really good story about instruction manuals. She was followed by Ros with Isabella, about a soldier groom ("she hadn't expected the word [mulligatawny] to sound like a mouthful of pebbles"); Paul with The Seer (which Fat Roland enjoyed), and finally Dave with a tale taking the mickey out of marketing speak ("diversity tsar" etc). The second half saw Nicky's funny Peverse Fruit, Alison with a story of travelling to Macau, and Lucia Cox with Tarmac Nights, my favourite. Lil Dave wasn't so keen as at least one rabbit was harmed in the telling of it.
Posted by Sarah-Clare Conlon at 3:08 PM