Take a walk on the Wilde side

I've lived in Manchester on and off for 20 years, yet for some reason no one has ever bothered to explore, it wasn't until very recently that I ventured into the Central Library to witness its myriad curvy delights.

It all started with a couple of casual visits to the theatre in the basement to do reviews. Then there were the sly trips to Manchester Literature Festival events in well-rounded side rooms off the upstairs corridor. Next followed afternoons during the snow when the heating packed in at work and we got told to go home but I'm an interim so there's no way I'm missing out on money hence I took my stacks of papers and reports to the big round reading rooms and took the red pen out on them there. Finally, I dipped my toe into the general readers library, even borrowing books and taking them away with me to enjoy at home.

I have to say, then, that despite being such a late starter, I've developed something of a soft spot for the place. I even mentioned it in a piece I wrote for the all-new Visit Manchester site. Now, of course, the removal men are in and the tons of tomes are being relocated shelf by shelf to a salt mine in deepest darkest Cheshire while Central Library is closed down for two years and spruced up. Sometimes, you know, my timing sucks. 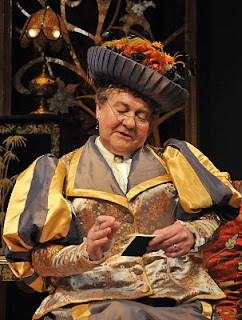 Anyway, to get a final fix, last night I bobbed along to the Library Theatre, one of only two areas to still be open to the public and the one that will be pulling the door to and leaving a note for the milkman to hold off deliveries until 2012. It was a packed house for The Importance Of Being Earnest, which, I hadn't quite realised, is the last-ever performance by the company in these surroundings. The Oscar Wilde number is on until Saturday 3 July, after which the actors pack up their powder and Pompidou wigs and relocate forever: first (thankfully temporarily) to The Lowry in Salford Quays; then, in four years' time, to the Theatre Royale (or Royales, as I know it) back in town. According to the theatre's Artistic Director Chris Honer, backstage at the roundhouse the facilities are "dreadful"; I can certainly vouch that out front it's a tad on the cramped side and not somewhere you really want to be on a hot summer's evening.

Anyway, smelling salts and caribou fans aside, the show was a fitting end to the almost 60-year tenure with laughs a-plenty and even a bit of cross-dressing. The play is funny as ever, with political jokes and literary pokes, and once I got into the swing of things (it always takes me a while to stop cringeing at farce), I enjoyed myself immensely. The actors did what they needed to and there were some good touches of synchronised singing; the wardrobe and props worked just fine, and the unusual two intervals, to take account of set changes, gave welcome respite from the stifling heat (interval 1: nice cold beer; interval 2: nice cold icecream). Russell Dixon, as Lady Bracknell, was immense, and while I instantly recognised him beneath the pancake from his role as Pozzo in 2008's Library production Waiting For Godot, I thought no more of it as he made such a fantastic impression as the society-obsessed Aunt Agatha (above). Bravo!
Posted by Sarah-Clare Conlon at 4:42 PM