Manchester Literature Festival is in full swing, and this week sees my diary well and truly stuffed to bursting largely thanks to the fifth annual foray into all things wordy. Today and tomorrow see me well versed, with two quite different poetry events, which I'll be writing about for the official MLF blog. Keep checking back for new posts (I'll nudge you via Twitter); I understand the nice lady in charge of loading them into the ether is a bit snowed under!

At the weekend, I'll also be reviewing "Is There A Novelist In The House?" (shortlisted entrants include Susie Stubbs of Creative Tourist and Benjamin Judge, the other half of my other blog Ask Ben & Clare) and "Rainy City Stories: Writing About Place", a chitchat between author Clare Dudman, my list chum Nicholas Royle and 2008 Manchester Blog Awards Best Writing On A Blog winner Jenn Ashworth. I'll also, of course, be gracing this year's MBAs with my presence, where the wonderful 330 Words, which kindly put a couple of my stories out into the world, is pitted against Who The Fudge Is Benjamin Judge?. Oh blimey. I'm so torn, I feel like Natalie Imbruglia.

The events I've squeezed into so far (packed houses all round, so me not putting my name down was something of a silly oversight; thank goodness I have friends in high places) have incorporated as much fascinating production detail as they have highfalutin literary knick-knacks ("highfalutin" is totally the wrong word there. These are far from pompous or pretentious shindigs. It is however a good word, and one which I had to look up in the dictionary). 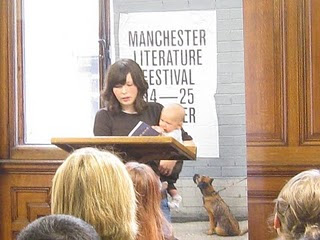 The first get-together was the Bugged launch, held in a room in the new but fleeting City Library; all fancy wallpaper and wood-panelling. This was the creative writing project mentioned in one of our popular regular features A Moment Of Fiction back in, ooh June, and encouraged contributions from scribes of all ilks. Co-founder Jo Bell filled us in on all the background and introduced each of the 14 poets, short storyists and "life writers" who gave snippets or full pieces of flash fiction, including the aforementioned Jenn (pictured above clutching McTiny and being stared at by the lovely little MLF dog adorning all 2010's promotional bumph) and also Valerie O'Riordan, who is mentioned later. Jo also explained the publishing process involved in getting the resulting compendium printed and distributed - the ever-improving "on demand" system worked a treat, she enthused. All the help you'll need to get your mitts on the collection can be found on the official site for "nosy buggers" (to coin a phrase). 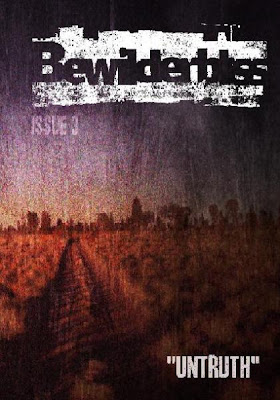 To yesterday, now, and a special literary zine showcase, featuring Corridor8 (also, similarly, largely following the published-on-demand model) and Bewilderbliss, in the all-new Cornerhouse Annex (a much-needed space, if I might tangentally divert). Bewilderbliss has been described on this hallowed scrolly-uppy-downy site somewhere before, and issue four of the University of Manchester's Centre For New Writing brainchild features pieces by W&F cohorts Benjamin Judge (see above), Dave Hartley and Valerie O'Riordan (who also happens to be the fiction editor for the publication). Now, until the Annex gig, I'd never actually seen a copy nor witnessed the enthusiasm, cake-baking skills and humour-filled, almost humbleness (is that even a word?) of current editors Matt and Jon, but I was already a fan. You can buy it in the Cornerhouse shop; I suggest you do.

(As an aside, I wonder if there are quite enough links in this post. More to the point, I wonder if any of them actually work.)
Posted by Sarah-Clare Conlon at 5:25 PM