Last night I appeared at the Manchester Literature Festival. And not just by turning up at a poetry recital or book launch. Nope. I actually climbed up on a stage in front of a ton of people and spoke into a microphone. Thankfully it was at about the right height, otherwise I'd've been jiggered. My first words were: "Hello." Pause. "I'm scared." Nice intro, wouldn't you agree? 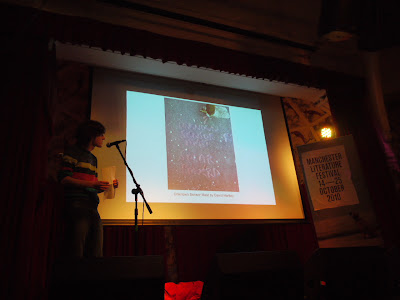 I'd been asked to read one of my short stories published on 330 Words, which was up for two gongs in the Manchester Blog Awards, the event in question. I presented An Accident Waiting To Happen, my first submission to the site. It went a whole lot better than I expected; I even heard tittering, and at the right bits. Phew. It leads me to conclude that consuming three pints of strong lager before any public speaking can only be a Very Good Idea. 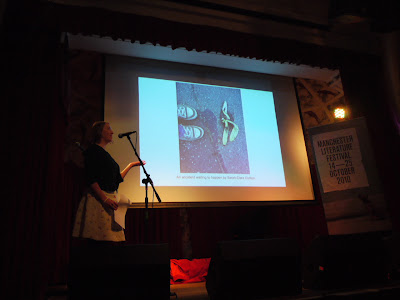 330 Words went on to snatch the Best New Blog, following in some damn fine footsteps, if I do say so myself. Congratulations to Tom Mason, and to all the other winners and shortlisted blogging champs. You can read the full list, with all the links and that on the MBA website. One day I may even get round to updating the blogroll here to reflect the newcomers. 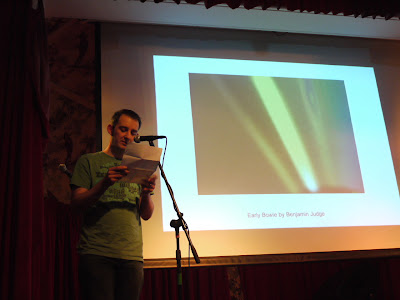 Back-slapping, too, to the organisers: the upstairs room at The Deaf Institute turned out to be a great venue with its raked lecture hall-style seating and fancy flock wallpaper, while hearing Chris Killen (aye, he of The Bird Room) read was also a fantastic opportunity. (I only recently twigged why the Blog Awards form part of Manchester Literature Festival, hence all the readings: all the writers who blog in our fair city. I know: I can be a bit tick sometimes.) 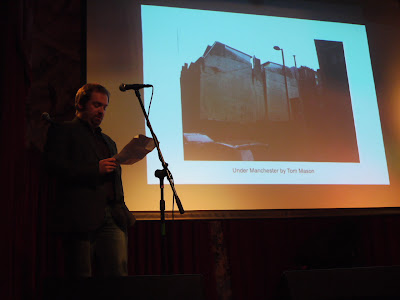 Valerie O'Riordan wrote about the glittering shindig on Not Exactly True. Ben of Who The Fudge Is Benjamin Judge? too. Meanwhile, Dave Hartley was the official reviewer of the event for the Manchester Literature Festival Blog although at the time of going to press, it hadn't been published. I'm also trying to get hold of some pictures, so it may well be worth checking back to see if I'm successful. (And to see evidence of me wearing a skirt, which happens about five times a year.)

ADDENDUM 22 October 2010: Jon Atkin of Manchester Literature Festival has kindly sent over some snaps from the 330 Words readings. I have now pasted them into this post following the same order in which we appeared: Dave Hartley, my good self, Benjamin Judge and Tom Mason. I have also spotted that Fat Roland has written about the bash on his star-spangled Blog Of The Year, also referring to a previous post using the search function on 330 Words to bring up two references to "bananas". They are in stories by me and L'il Dave, and we (well, it was me, actually) happened to mention this on the very soiree. Well I never.

POSTSCRIPT 25 October 2010: Another wee mention, this time on the Manchester Blog Awards website. Thanks folks!

AND ALSO THIS 11 November 2010: Dave Hartley's write-up on the Manchester Literature Festival Blog, which has somehow alluded me until this very day.
Posted by Sarah-Clare Conlon at 9:30 PM