The first rule about Book Club...

Following on from last month's call to arms, going on for 20 ladies and gentlemen (slightly more menfolk than women, but that's the way it goes) gathered at Madlab last night to reinvigorate the Sci-fi Book Club for 2011.

This was a most encouraging turn-out and various ideas were knocked about for how to proceed. It was decided that the remainder of the reading list from 2010 would be scrapped, so if you were reading The Book of Dave by Will Self or Feersum Endjinn by Iain M Banks, tough. The six below were offered and agreed instead. They will probably take this order, but for updates follow the all-new Twitter feed: @mcrsf_madlab and use the hashtag #mcrsf in Tweets. Sci-fi Book Club meets at Madlab the third Tuesday of the month at 7pm; the next get-together is Tuesday 15 March. There will be pizza and perhaps beer, so bring your pocket money. 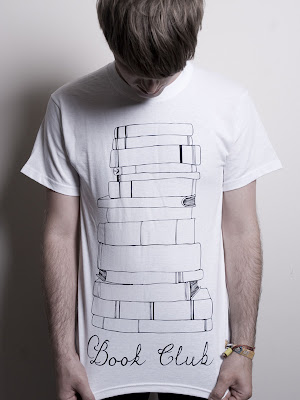 Photo by Book Club Clothing, who will be touting their wares in the Kestrel Suite at Common, opposite Madlab, on Thursday 24 February 7.30-10.30pm. Be there or don't get a fab book-inspired tee.