Three is the magic number

Last night's Bad Language event at the Castle Hotel on Oldham Street was another corker. This was number three of the regular monthly outings. There's a load of pictures on organiser Daniel Carpenter's Facebook page, so be nice and make friends with the fella then you can see them. Here's one of me looking suitably entranced by newcomer Aaron Gow, regular contributor on Dave Hartley's wunderbar Screen150 (on which I have a new review this week, of my favourite film Black Narcissus, complete with a picture I drew with coloured pencils and that. Get me). Aaron writes about the experience here; he kindly doesn't mention that I pronounced his name incorrectly, bless him. 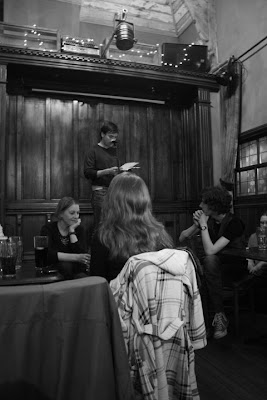 So, lots of people took to the stage for the increasingly popular open mic slot (I've already signed up for next month so's I don't miss out on torturing the masses with my weird and wonderful tales of death, destruction and, er, clown outfits). I really can't be bothered listing all the performers, partly because I'm lazy but largely because I'm hungover, but suffice it to say #beatoff were out in force. Fat Roland did his tooth fairy story off of 330 Words, Tom Mason did the unabridged (I believe) version of Dream Girlfriend, my Ask Ben & Clare compadre Benjamin Judge brought back to life some women authors as zombies in Brains, the aforementioned Hartley (modelling a second natty waistcoat. Who'd've thought?) got his revenge on rude bookshop customers, and I treated the hordes to Dress-down Friday, inspired by my first run-in with the concept, in my current place of work. Special mention goes to Claire Symonds and her fabulous tale of magpies. She's a good egg and even bought Tom a mop and a tomato for his birthday, which he was celebrating, quite obviously, in style.

After David Gaffney's fantastic PowerPoint presentations last month, this time the headline slot was filled by poet Jo Bell of Bugged. She read some stuff from Something Everyday (I really love Urban Mermaid from 21 February), alongside the project's editor and fellow poet Max Wallis, and plenty of other great potty-mouthed poetry. Next month's event features Rod Tame, another poet (who brought a bit of steampunk to the shenanigans), and takes place on Wednesday 30 March, starting at 7.30pm. All the details are on Facebook here. In the meantime, don't forget that the deadline for submissions to the next Bad Language anthology is 2 March. That be next week, me hearties.

ADDENDUM 27/02/11, ERRATA: The lovely folk at Bad Language tell me that, in fact, Rod will be the special guest star at April's event, not March's. March is still TBC.

ADDENDUM 07/03/11: March guest has been confirmed as Gerry Potter poet. The date has come forward a week to 23 March.

More on the last event here, courtesy Matt "CageFightingBlogger" Tuckey - thanks for the mention!
Posted by Sarah-Clare Conlon at 6:49 PM