The exposed brickwork of the Engine House at the International Anthony Burgess Foundation is becoming a familiar fixture in my life. Last Thursday, I was once again gazing upon its redness, at the meeting of the two Nicholas Royles.

Both writers, the pair have known each other since first being confused when new writing magazine Sunk Island Review rejected a short story by each but sent the rejection letter for both to just one. (Are you keeping up?) The recipient was Nicholas Royle, Professor of English at the University of Sussex and author of various non-fiction "academic" works including the appropriately entitled The Uncanny, and pictured below on the right. He forwarded the rejection, both stories and a covering note to Nicholas Royle, Lecturer in Creative Writing at Manchester Metropolitan University and author of various fiction "non-academic" works including Counterparts, Saxophone Dreams, The Matter of the Heart, The Director’s Cut and Antwerp, and pictured below on the left. 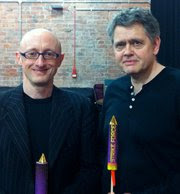 Royle Manchester (as University Challenge would have it) explained, "Our interest in doubles predated being aware of each other", and it's this shared curiosity along with the shared moniker that led the two to arrange to get together, at a lecture in London some years ago. They have since continued to meet up socially, have toyed with the idea of collaborating on a project called "Double Take" (watch this space - you never know!) and are still intrigued by the coincidences caused by the crossover of name and profession.

As well as chatting and fielding questions from the floor, the two Nicholas Royles also read their work. Royle Manchester treated the 50 or so audience members to his number-strewn short story The Maths Tower ("at, where we at MMU like to call, The Place Down The Road") along with the first half of the new weird but wonderful The Other Man. Can't wait for the full version when it's finished. Royle Sussex, meanwhile, gave us two extracts from his richly descriptive first novel Quilt, described by The Guardian as "an intense study of grief and mental disintegration, a lexical celebration and a psychological conundrum". Can't believe either of them would have their work rejected. Just goes to show, eh?

Photo, ahem, "borrowed" from Rob Spence's Topsyturvydom blog, taken by Matthew Frost of Manchester University Press, who whet the whistles with their whiskey (try saying that when you're pished). Hope Rob and Matthew don't mind!
Posted by Sarah-Clare Conlon at 1:34 PM