Henrik Ibsen is a popular man in Manchester at the moment. It was only October when the Royal Exchange dusted down The Lady From The Sea and gave it a rare airing; now the Library, temporarily playing out of The Lowry, is tackling the rather better known A Doll's House.

A Doll's House caused a bit of a stir when it hit the Norwegian stage in 1879, taking a dim view as it does towards the traditional role of women and the 19th-century norms of marriage. It has often been tagged as a feminist piece, but if Nora making off to drown herself in a fjord after being exposed for conspiring behind her husband's back is feminism, well...

I'll admit I wasn't in much of a mood for a morality tale on Friday evening, but actually I enjoyed the play. Director Chris Honer's device for underscoring Nora's progressively mad mutterings to herself gave strength to the soliloquies; although the crescendo door-slamming was less effective, tending towards farce at points. As is often the case with Library productions, the set and costumes were a little staid, with period furniture and bustles a-plenty, but it worked well here with the Ibsen Realism.

Despite the famous Ibsen Naturalism not being played up as much as at the Exchange (largely because this play is completely indoors), there were some light floaty movements when Torvald (Ken Bradshaw) is comparing Nora to a bird. Other imagery includes financial: Dr Rank (Daniel Brocklebank) describing his foreseen death as "bankruptcy" and "liquidation"; Torvald's timely banker and bonuses chatter raising a laugh or two. Probably my favourite performance was from an impressive Paul Barnhill as shady wheeler-dealer Krogstad whose heart is melted by ice queen Mrs Linde (Sarah Ball), and special mention goes to my former schoolmate Emma Cunniffe, who was incredibly convincing as the increasingly delusional Nora. Solid stuff. 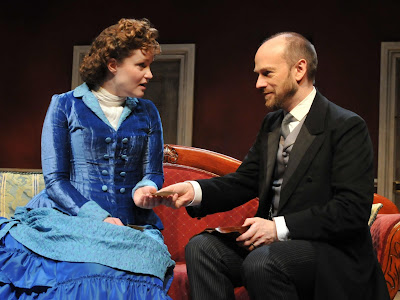 Emma Cunniffe as Nora and Ken Bradshaw as Torvald. Photo by Gerry Murray.

A Doll's House continues until 12 March. See the Library website for full details.
Posted by Sarah-Clare Conlon at 11:41 AM