Thought I'd share with you this pic from last week's Twestival, when me and three out of four of the Flash Mob boys provided the entertainment with our pop-up literary salon. Fat Roland broke the ice with two unique audience-participation pieces (the first, a tongue-twister; the second, his Beyonce haiku). Benjamin Judge then took to the stage and presented one of his idiosyncratic stories of mammals (the man is obsessed, I'm telling you). Last but not least, I had the pleasure of reading a tale of Tweetdeck and twotnot as its creator Tom masterfully pinged inter-related Tweets by the characters Helen, Scott and various pop and rock stars up onto that there Twitter stream on that there screen, the one in the picture. Raised a few chuckles around the place, too, I noted. The magic of modern technology, eh? 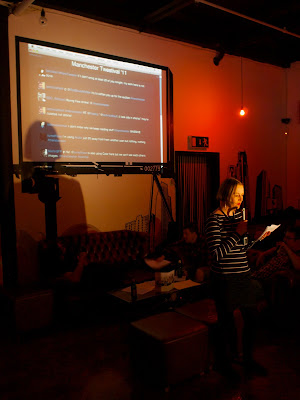 Thanks to Sam Easterby-Smith for providing the photographic evidence.
Posted by Sarah-Clare Conlon at 4:49 PM