OK, folks, the blogging laziness continues. I can only apologise, but I promise that plenty of exciting things are going on behind the scenes and all will be be revealed soon, when you will hopefully forgive me for neglecting you so. 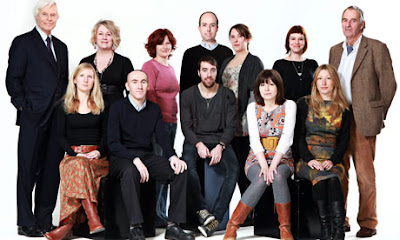 In the meantime, I just wanted to mention that I finally got round to watching New Novelists: 12 Of The Best, A Culture Show Special, which was shown on the tellybox on World Book Night. That being a Saturday, I was of course out painting the town red. Anyway, I saw it last night via the magic of Betamax, and thought it was very interesting. I'm sure you're bothered.

I enjoyed learning about the historical background to the idea of listing the best new writers at a given moment in time, and the controversy that has often entailed. I enjoyed hearing the various views on creative writing courses, and how most of the novels that were finally chosen as the golden dozen had a similar narrative structure, which the panel (led by John Mullan, who writes about the process in The Guardian here) put down to studying "the art" at college. (Whether that's a good or a bad thing, make your own mind up: I ain't here to judge, honey.) I enjoyed being made aware of 11 new books and 11 new writers, and seeing the 12th, local lass Jenn Ashworth, make her screen debut. More from Jenn here, and more on her soon on this very blog.
Posted by Sarah-Clare Conlon at 1:25 PM