Another day, another play; this time Noel Coward's Private Lives at the Royal Exchange. I'm not much of an authority on Coward, but the Exchange's production of Blithe Spirit just over a year ago was so full of frivolity and flapper dresses (for which I have something of a weakness) that I immediately wanted to see this when I heard it was going to be on.

I wasn't disappointed. As ever at this theatre, the sets were fantastic, with an almost authentic ornamental garden laid out for the first act and a plush 1930s Parisian apartment, complete with grand piano (that is played live - oh, the talent!), for the second. The costumes and accessories too were beautiful, from the men's suits and smoking jackets to the ladies' travelling clothes and floaty evening gowns.

It's an excellent text, full of witty repartee and clever wordplay ("Don't quibble, Sibyl", etc). Even the bits in French are funny, and, while you might need to parler un petit peu to fully understand, the actress playing the maid (Rose Johnson) gets the point across with some comedy gestures and fabulous hamminess.

The remaining characters are Elyot and Sibyl Chase and Victor and Amanda Prynne; a pair of honeymooning couples, two of whom (Elyot and Amanda) were previously married - obviously with hilarious consequences. Simon Robson is wonderfully caddish as Elyot; Joanna Page (of Gavin and Stacey fame, I suddenly realise) has some lovely histrionics (and kiss curls) as Sibyl; Clive Hayward plays the puffed-up stick-in-the-mud Victor incredibly well - but it's Imogen Stubbs as Amanda who steals the show. She's cute and coquettish, cheeky and charming - and brilliant at tango and charleston. And she gets all the best lines:

I think I want to be her. 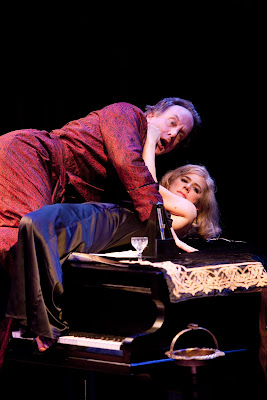