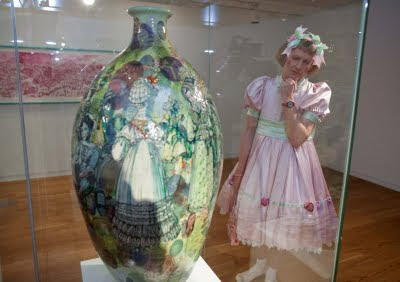 The long landscape (seen in the background in the photo), in the subtle red and cream hues of a French toile wallpaper, looks like one of those old city views or a battle scene, which is what it is. Various groups of mini figures are labelled, with the "tabloids" firing missiles across the sky, the "minimalists" crashing and burning in a plane, and "childless couples" threatening the rest of society in their helicopter gunship. There are "townies", "rockers" and "smokers", "animal rights activists" and "paranoid conspiracy theorists". It's good; I spent ages looking at the minute details. Great billowing clouds of smoke, lots of Goyaesque blood and gore.

Love that the "women" are just meandering around in bonnets and long Jane Austen-style frocks (I feel a common thread here) while the "men" are holding court at the top of a tower, which, as the tallest erection in the piece (even bigger than the mountains), presumably alludes to phalluses.

This is another running theme in the works on display: the companion vases Entrance To The Forest (2002) have pink flacid penises as trees and golden used prophylactics scattered about the woodland scenery. Perry says the pair of ceramics represent "the mythical gloomy wood, but also the seedy cruising grounds of urban parks". Ah, how romantic.
Posted by Sarah-Clare Conlon at 2:23 PM