Let's talk about art, baby. Yep, in a break to our usual scheduling, we're having a look at art, you know, like we always used to do before we got sidetracked by smut peddling.

So, you may have been aware that Manchester International Festival was on just recently, and last Thursday I finally got round to going to the 11 Rooms show at Manchester Art Gallery. Maybe it's just me, but a man in a soldier's uniform standing in the corner of a room staring at the wall isn't what I'd call art. Nor is a pre-teen girl reciting a very strange text and interacting with the audience. And what on earth was Marina Abramovic doing putting that poor woman up on a wall in the nid, seemingly pretending to be a clock. Her arms must've been killing her. Sorry. I was a little non-plussed, to be honest, although I will admit that I was rather intrigued by Xu Zen’s In Just A Blink Of An Eye with a guy mid backflip - real; not real? Also quite liked Lucy Raven’s out-of-tune pianola programmed with the worst Les Dawson duet ever. But is it art?

Player pianos seem to be de rigueur with the old artists at the moment. Constellations at Cornerhouse features a Yamaha Disklavier, although it didn't seem to be working when I went, and from what I saw, Beethoven's Moonlight Sonata was being played through a stereo. Still, it did mean that my friend could show off his own keyboard skills, which made curator Karen Gaskill laugh when I told her. I thought we were going to get slung out. The music is the result of Katie Paterson transmitting a Morse code message of the piece to the Moon, which, when reflected back to Earth, was turned into the score (like Raven's 11 Rooms work, imperfect) that you hear in the airy top-floor gallery. The punched pianola roll is also displayed as part of Earth-Moon-Earth, and, as a whole, it's an interesting project. 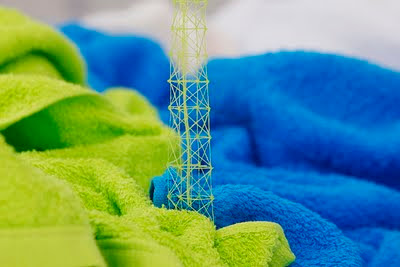 I was also partial to Takahiro Iwasaki's work in Gallery 2: miniature pylons and masts; structures we usually only consider large and imposing. I was particularly drawn to the composition with coloured towels, called Out Of Disorder, Towels (pictured). Maybe I like bathroom accessories.

Two other artists, Kitty Kraus and Felix Gonzalez-Torres, make up the remainder of the exhibition, which "explores impermanence, ephemerality and movement". The show continues until Sunday 11 September and is co-curated by Michelle Kasprzak. I only told you about Karen earlier because she is my friend. There we go: a bit of healthy name-dropping on a Thursday afternoon.
Posted by Sarah-Clare Conlon at 4:03 PM