I've been into maps for a long time; probably since knocking around the great Wirral sprawl where I was brought up. I got a map of the area from an estate agent and carried it about in my bike basket as I cycled around the sweeping streets of the vast 60s estates exploring as far as the edge of alien green fields.

I like the hidden details maps reveal and the fact that they are so quickly rendered out of date by urban development, change of usage or land reclamation. Topography offers a glimpse into the past: OS Explorers often show Iron Age settlements in the remotest of places while urban A-Zs magic up historic rail and road networks. 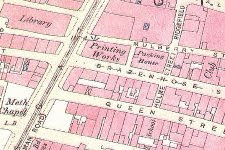 At sea, maps are called charts: refer to them otherwise and expect to be scowled at. There's stacks of interesting features you get on charts that you don't get on maps, like submerged wrecks and underwater cables and submarine training areas. Nautical charts also show water depths and drying heights, so mariners can work out if they'll be beached when the tide goes out.

Back on dry land, and I'd heartily recommend the fantastic, free Mapping Manchester exhibition at John Rylands Library on Deansgate - it's even been extended until 28 March by popular demand! The show includes plans of the redevelopment of Hulme, sketches of the proposed route of the Ship Canal, diagrams of the Belle Vue Zoological Gardens; even a drinking map of the city. There are photos from a bygone era, artists' impressions of a future transport system, and a Soviet facsimile for possible invasion forces. It's so absorbing, I've been back for seconds.
Posted by Sarah-Clare Conlon at 2:10 PM