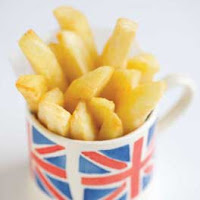 Modern English Language Professor Clive Upton is quoted as saying: “It’s interesting that the word ‘chip’ is almost universal across the country, except where it’s been Americanised as fries, but it is in the language surrounding the chip’s accompaniments and serving methods that regional phrases appear. For example, what they call a chip butty in the south of England will be known as a chip cob in the Midlands and a chip barm in Manchester.”

There used to be a splendid chip shop in Chorlton that had a side room where you could dig in to your supper while enjoying the tropical fish, Coronation Street on loop, Stella on tap and choice of optics for "un petit digestif". Sadly, it's now a fancy antiques shop, but Beech Road Chippy still does a nice line in mushy peas while the newly opened Atlantic Fish Bar on the main drag has haddock the size of whales. My favourite chipshop name has to be The Codfather, out on the other side of Stretford. I also like the moniker Chippery, which I've only ever seen in Lancashire's Longridge.
Posted by Sarah-Clare Conlon at 11:47 AM