This evening we'll be celebrating Burns Night round ours, complete with a genuine Scottish haggis bought at the butcher's in Juniper Green near Edinburgh by a friend from Ayr. We'll be having it traditional style with tatties and neeps, although we may pass on all the speeches and singing, and bagpipe-swinging.

I admit I know very little about the Bard of Ayrshire Rabbie Burns, whose birthday we'll be celebrating, so I have been checking him out online. He wrote Auld Lang Syne, among other things, and is known as "Scotland's favourite son" and the "Ploughman Poet" (presumably because he couldn't get enough of Branston Pickle).

It turns out Steinbeck's title Of Mice And Men came from the Burns poem To A Mouse, as did the phrase "tim'rous beastie". So that's where the name of Timorous Beasties, the trendy Glasgow-based wallpaper company, whose designs were once described as “William Morris on acid”, came from. Some of their patterns remind me of last year's Turner Prize winner Richard Wright's fleeting, almost diaphanous gold-leaf mural. This one's called Bird Branch: 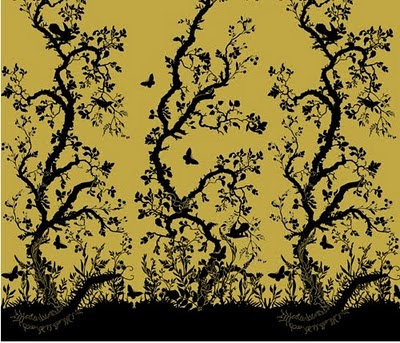 Posted by Sarah-Clare Conlon at 2:38 PM