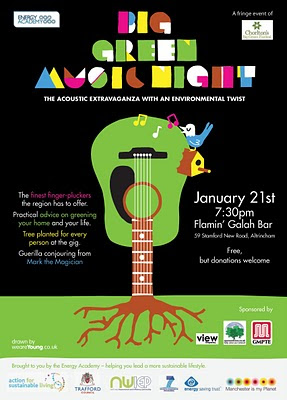 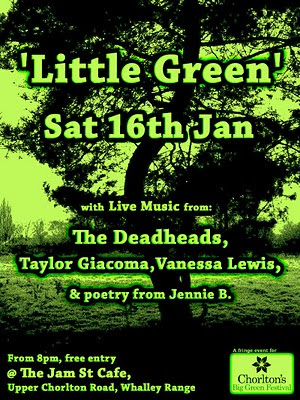 I've been busy this week copywriting for the soon-to-be-launched new and improved Big Green Festival website, along with various other extra-curricular tasks. Maybe it's because I love pies that I have my fingers in so many, but Chorlton's Big Green Festival was my first so it occupies a special place in my gravy-laced calendar.

This year, CBGF celebrates its second birthday (on Saturday 27 March) and, like any festival worth its road salt, it's now got its own fringe! Here are posters for the first two fringe events, one of which is tomorrow at the fabulously named Jam Street Cafe. Someone once told me that it's so named because the road on which it sits, Upper Chorlton Road, takes you up to the jam factory. I don't know if that's true or not; it would be something of a circuitous route to the soon-to-be former 113-year-old Duerr's HQ on Prestage Street in Old Traffo. Whatever, we jammin'...
Posted by Sarah-Clare Conlon at 4:12 PM