You know I like to be honest with you guys, so here it is: my name is Words & Fixtures and I'm a secret geek. There, it's been said. It may have been said before, I'm not sure, but now it's definitely out there. It's out there, it's out of my hands. It's in the big wide world and the vastness of the ether.

I admit it: I'm a bit of a geek and I like sci-fi; mainly films, but also TV, and sometimes even books. 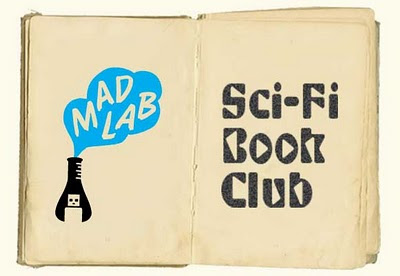 Anyway, it seems I'm not alone in the universe. And to prove it, a melange of Manchester social media luvvies have only gone and set up a Sci-Fi Book Club, founding members of which courageously battled their way through snowstorms to inaugurate yesterday evening. I have to admit I didn't actually put in an appearance myself, but I did send a representative to report back on proceedings. Seems proceedings went well. A bunch of "15 or so" likely candidates met at Madlab (aka Manchester Digital Laboratory), discussed a possible reading list, worked out a date for the next get-together, then decamped over the road to Common, which it strikes me is not uncommon if you are a Madlabber.

Anyway, hop on board, join the ride, get on over to the Oxfam bookshop and let the crazy reading party being! The initial book list is below and the next fixture (when first tome The Forever War will be under discussion) is Tuesday 16 February (more here):

...plus, in case discussion dries up, or Common runs out of Star (whichever comes first), it has been decided everyone should also have a wee shufty at A Science Fiction Omnibus, a collection of short stories edited by Brian Aldiss and including Isaac Asimov's 1941 classic Nightfall. Maybe I'll see you some time in the future...
Posted by Sarah-Clare Conlon at 4:07 PM