My friends at Manchester Lit List have written an interesting article on their blog about William Seward Burroughs. NYC-based photographer Peter Ross (owner of perhaps the most minimalist website to have ever prowled the ether) has documented the Beat writer's belongings, which have remained in his windowless Bowery home (a former YMCA locker room, known as The Bunker) since his death in 1997. The photographs give an awesome glimpse into the rather, er, unconventional existence of The Naked Lunch's creator, and remind me of peeking into the recreation of Francis Bacon's studio at Hugh Lane gallery in Dublin.

There's an interview with Ross here, providing some insight into how the now inanimate objects inspired him and gave rise to this project. I hope he doesn't mind me taking the liberty of featuring one of his lovely images to illustrate this post, but it would be pretty bloody pointless without. I've picked a pair of walking sticks (apparently Bill had quite a collection), and have discovered, from a piece on accessories in GQ magazine no less, that "William Burroughs ... carried a cane. He was skilled in the art of cane fighting, and his particular cane may well have had a blade tucked inside". Hm. Made a change from his usual gun fandom, I suppose. 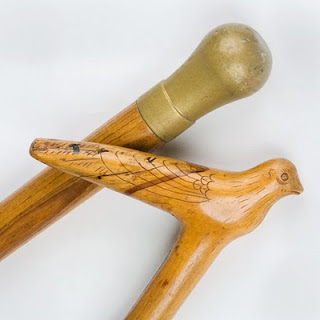