Just stepped out of the salon

You'll be pleased to know that the Flash Mob Literary Salon was a roaring success. Well, I enjoyed myself, at least, and other people seemed to, including your Toms Fletcher and Jenks, your Chris Killen, your Joe Stretch. Either that, or they were being polite. Oh well. I had fun. I drank copious pints of Hell and I liked wearing my new frock (that is, until Ben suggested it might be see-through, which was a little offputting given that I had to go up on stage another two times. Personally, I don't think it was. And if it was, at least the audience got some cheap thrills). Anyway, other people have written about the event, so I suggest you read what they've said so I can go off and eat some cake.

The evening's been written about by Bad Language's Dan Carpenter on the Chorlton Arts Festival blog (a fantastic innovation by my Chorlton Arts Festival colleague Sarah) here and Nici West here. Our special guest star Nik Perring has written about it here as has my fellow Flash Mobber Dave here. You can now read all twelve of the shortlisted stories in an anthology which we have published online. Whizz on over to the Flash Mob website, and it's all there in glorious technicolor. 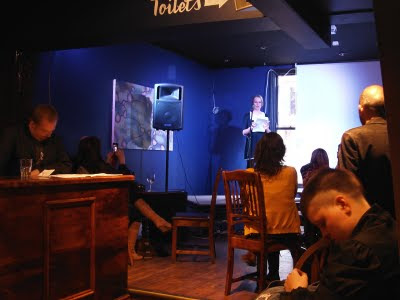 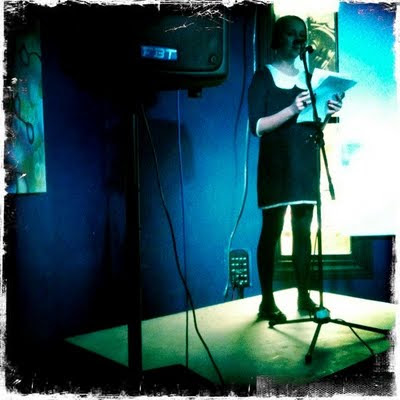 Being gluttons for punishment, the Flash Mob gang, who will henceforth be known as Flashtag (don't ask: this must be the fifth name we've had), are now working on some more events and projects. First up is the Flash Language Literary Pub Quiz we're running in conjunction with Bad Language for the Not Part Of fringe to the Manchester International Festival. That is on Wednesday 6 July at 7.30pm at Barcelona in the Northern Quarter. We're also hoping to be collaborating with Bad Language again for the Oxfam Bookfest later in July.

At the moment we're also putting together an application for September's Didsbury Arts Festival. Our current intention is to possibly run a smut night (my idea). Going on our track history, however, that could all change. Fingers crossed it doesn't.
Posted by Sarah-Clare Conlon at 4:44 PM