Last night was jampacked with exhibition previews and launch parties, but one not mentioned by our eye on the art scene Creative Tourist was the Polish Film Poster show, part of this year's Kinofilm. The festival of short European films has been on hiatus for a couple of years, but it's back and officially launches next week, so more on the movie side of things here then.

Kinofilm 11 teams up with Polska! Year for a special focus on new Polish cinema, which is where this poster art exhibition comes in. Running from today until 16 May (Wed-Sat 11am-6pm, Sun 11am-5pm) in Manchester's favourite underachiever The Triangle, the free show gives a rare insight into the unique characteristics of Polish poster art in the second half of the 20th century. 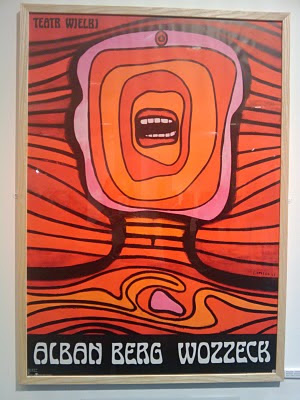 Featuring films by directors as diverse as Jim Jarmusch, Roman Polanski, Alfred Hitchcock and Martin Scorsese, the works vary immensely, but common themes are that they are all highly stylised and hand drawn rather than photographic or computerised, and each is very much of its time. The collection, largely owned by Kinofilm director John Wojowski, spans five decades from the 50s, and is an informative introduction to the Cold War era Polish Poster School.
Posted by Sarah-Clare Conlon at 10:02 AM