Earlier today, I managed to swing by Manchester Art Gallery for a wander around their latest exhibition, A World Observed 1940-2010: Photographs by Dorothy Bohm.

Admittedly, it took me a while to get down there. This, in fact, was my third attempt. I went to the preview last week, but I didn't get to pre-view a lot due to the distraction of free Peroni and some rather in-depth discussions about the architectural practicalities of the glass structure linking the old art gallery building to its modern sister. (I noticed some shattered high-up panes today, actually.) Next, I promised to go on the show's first day open to the public, then found myself sidetracked by a nice new pair of pumps.

Anyway, better late than never, I say, and I'm actually glad I went under my own steam. Less crowds harping on about depth of field (I imagine), plus it's big. HUGE! There's so much to see, it's almost overwhelming. I'm so pleased it's running until 30 August as it gives me plenty of time to revisit and perhaps concentrate on the bits I liked best, namely the street photography Bohm took up in the late 1950s, firstly on black and white film and later using Kodak colour. While I agree with Bohm's own assertion that she prefers B&W because of "the abstraction of tones", her early Kodak prints prove that saturated colour holds its own subtleties. 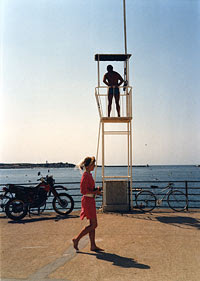 Various themes run through the show (curated, incidentally, by Dorothy's daughter, Monica Bohm-Duchen), with definite categorisation: from the lovely "human interest" shots (mostly unposed, in direct contrast to Bohm's original portraiture business on Market Street; more about that on the Dorothy Bohm in Manchester blog) to the rather less intriguing still lives and snaps of billboard models. The final section is a study of modern-day Manchester, but I think it might well be the collection of reflections, shadow play and trompe l'oeil murals that I give more attention to on my next visit.